The Rise and Fall of Wade Redden

Share All sharing options for: The Rise and Fall of Wade Redden

There are few players that have played for the Senators organization that elicit the kind of passionate response that Wade Redden receives. And unfortunately, though the responses to Redden early in his career were rather positive, they have now become that of the four-letter, unprintable variety.

So just what happened to Wade Redden? It isn't entirely obvious. 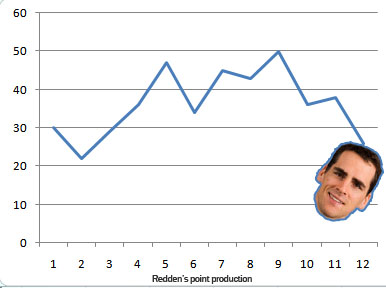 Redden entered the league with endless promise. He helped lead the Brandon Wheat Kings to the Memorial Cup tournament twice, was a part of two gold-winning Canadian world junior teams, and was drafted second overall by the New York Islanders in the 1995 NHL Entry Draft. He was drafted behind the Senators' draft choice Bryan Berard, and the two ended up being traded before either stepped foot into the NHL.

Redden then scored his first NHL goal on his first shot in the NHL, and was voted rookie of the month in April of that season. He helped the Ottawa Senators make their first modern NHL Playoff appearance that season, and he would be an integral part of their playoff streak from that point on. The Ottawa Senators would not miss the playoffs again until the 2008-09 season - their first without Redden.

Redden continued to improve his game and become a huge part of the Senators franchise. He was well-liked in the community, hosting a luxury suite in Scotiabank Place for sick children and doing lots of charity work. In the 1999-2000 season, he became alternate captain for the team. He was named to the NHL All-Star Game twice, in 2002 and 2004. He represented Canada five more times on the international stage, at both World Championships and the 2006 Olympic Games. In 2005-06, he posted career-high numbers in assists, points, and plus/minus.

Then, at the end of that 05/06 season, the Senators organization kept Redden and let Zdeno Chara walk. And things just haven't really been the same since.

Redden started making sloppy defensive plays, and appeared slower. His stats dropped in pretty much every category. Fans started to turn on him, and used him as a scapegoat for all of the team's struggles. Rumors of various problems in his personal life surfaced, and deep pangs of regret filled the organization for ever letting Chara leave. Redden faced extensive amounts of criticism, and the team tried to trade him on several occasions. Redden used his no-movement clause to refuse both trades, stating a desire to stay in Ottawa and help the team win its first Stanley Cup.

The team did not, and Redden's contract came to an end. As a free-agent, Redden ended up signing a big-money, long-term contract with the New York Rangers: six years at $39 million. This contract was seen as a big overpayment at the time, and even more so in hindsight - Larry Brooks of the New York Post recently called it "the worst [contract] in the history of the NHL, if not in the history of hard-cap pro sports."

The 08/09 campaign was not one to remember. Redden put down career lows in nearly every notable category, including 26 points, a -5 plus/minus, and an abysmal shooting percentage of .017, more than .027 lower than his previous worst. 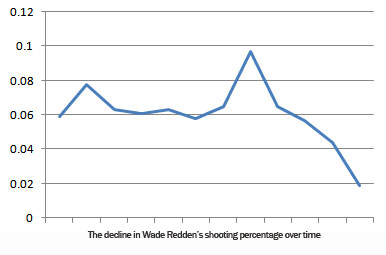 And to cap off an entirely forgettable and mediocre season in New York, who should be the last man back as Sergei Fedorov eliminates the Rangers? Wade Redden, who passively watched Sergei's shot blister past him, then Lundqvist, and into the back of the net.

With the first-round exit and disappointing performance, more questions now surround Redden. With the recently signed Matt Gilroy on a one-way contract worth $1.75 million next year, and Michal Rozsival signed on for another three years at $4.33 million per year, there's not much cap room on that team for defenceman that produces Wade Redden numbers. But is there any other team in the league that would take on such a contract? It's not likely.

One can only hope that Wade manages to rediscover the touch that had him pegged as an elite defenceman only a handful of years ago. It would be a shame for him to end his career known more for a bloated contract than for his play with the puck - but that's exactly what seems to be happening.