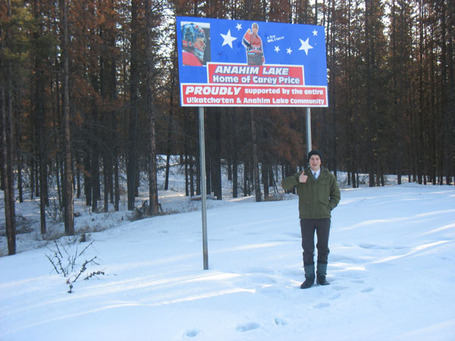 I recently had the good fortune to take a week long trip to Anahim Lake, British Columbia. I was invited there for work -- I'm currently finishing up a four month co-op work term with Crown Counsel -- and felt fortunate to have the opportunity to witness how criminal prosecutions operated in such a small town... small being the key word with Anahim Lake. Anahim Lake is made up of several aboriginal reservations, which makes its population hard to determine - some put it at around 700, others around 1500 people. If you're going by the latter figure, then you are likely including several neighbouring communities, such as Nimpo Lake (which is where my resort/motel was located).

Visiting the town makes Carey's rise to hopeful saviour of the Canadiens all the more intriguing. The town has no true arena, just a small outdoor rink that did not appear to be very old. It also has no organized rink: Carey's dad drove his son out to the nearest city, Williams Lake, three times a week to play minor hockey. While that sounds like dedication already, it should be emphasized that Williams Lake is about four hours away from Anahim Lake. Williams Lake is also the nearest town with any schooling above grade 9, just to further emphasize the remote location that is Anahim Lake. Even the courthouse is not what you'd expect: it's merely a slightly done up double-wide trailer. 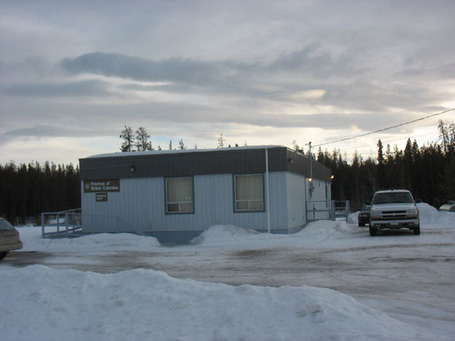 The town itself is a gorgeous place, situated near many beautiful bodies of water. Unfortunately, like many indigenous reservations in Canada, Anahim Lake is home to rampant alcoholism. While there, the most commonly prosecuted crime appeared to be driving while intoxicated, although in Anahim Lake it is more frequently on an ATV than a car (this is due to the town being filled with convenient back trails, but also likely due to it being isolated from anybody qualified to give driving certification). The town's forestry industry has also fallen victim to the notorious pine beetle, and there was very little work available while I was there. 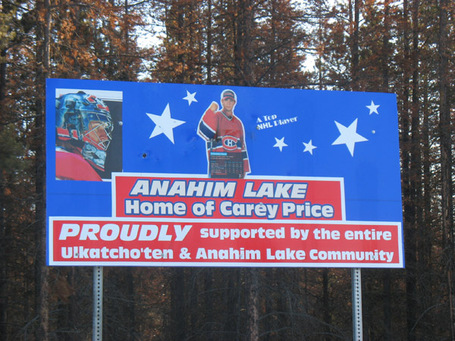 One thing that was evident was that it did not take long for Carey's home to erect a sign in his honour. This likely has something to do with his mother being chief of the Ulkatcho First Nation, the aboriginal government responsible for the area. Either way, it was still surreal to see a sign erected so early into Price's career boasting that he is a "Top NHL Player," particularly as I was there during the time he struggled (and was replaced by Jaroslav Halak).

Although I was working too much to get many stories out of the locals, one member of the RCMP in Anahim Lake had a good memory he related to me. He said he was conducting a road block one night last summer, when Carey's vehicle came to a stop - a motorcycle with Quebec plates. The officer briefly said hello to Carey, who very innocently asked, "Um, do you need to see my I.D.?" The officer laughed, saying "No, that's quite alright. I know who you are." Oh, and just in case you were curious - he did not have three cigarettes in his mouth at the time.

No matter your feelings towards Price as a goaltender (or as a Hab), there is no doubt that his journey to the NHL is quite a remarkable one.