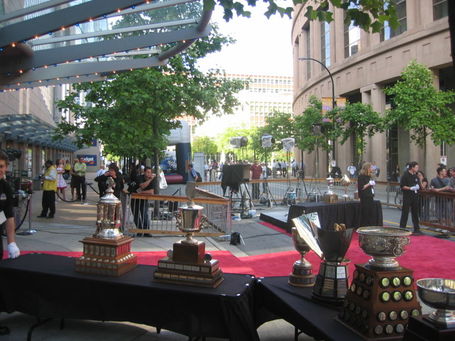 Across SBNation, hockey blogs are offering their team's picks for the NHL awards coming up after the season. Here are my picks for the Sens' award winners, but please debate any i nthe comments section.

Alfredsson was, quite simply, the Senators' best player this year. When other players would take a night off, Alfredsson would still be working. When the Senators were at their lowest points, the captain was still playing his heart out and was there to address the media. It wasn't a pretty season for the Senators, but Alfredsson was a bright spot.

Shannon hasn't even played half the season, but fans and players alike have recognized and appreciated the hard work that he brings to the ice for each shift. He's scored 19P (8G, 11A) in his 31GP, but has only been assessed one minor penalty. His small stature doesn't preclude him from playing a gritty style, and he rarely shies away from physical contact or corner play.

When the anointed NHL goaltenders faltered, Elliott was lighting up the AHL and was named a starter on the Canadian AHL All-Star Team. Before he could play in it, though, he was recruited to the big squad, and he hardly missed a beat. Ells has more wins (16) in fewer games than Alex Auld, and good numbers (even though they've taken a beating recently).

Ottawa's undergoing a bit of a youth movement of sorts, and Elliott led the charge this season. He had a significant impact on the team once he'd joined, setting a Senators rookie record with eight straight wins, and helped Cory Clouston change the team from a drastic underperformer to a too-little, too-late playoff hopeful.

Volchenkov has been a consistent defender for the Senators. Although he started the year slow under Craig Hartsburg's tentative system, he has benefitted tremendously from Clouston's more aggressive style. He's 29th in the league with 176, despite playing 10-15 fewer games than the leaders, and is eighth i nthe league with 170 blocked shots. He's also been assessed far fewer penalty minutes than in past seasons, a testament to better positional play the really helps the Senators by keeping their best PKing defenceman on the ice.

Alfredsson was the Senators' nominee for the Masterton for good reason, and those are the same reasons why I've chosen him. When an average player (to say nothing of a weak player) would probably have taken several games off to rehab from either anthroscopic knee surgery or a jaw fracture, Alfredsson missed only one game for each injury. When the season goes as bad as it had, it takes genuine dedication to risk further personal injury when the potential reward is so minimal.

Not really a tough call here. Whether or not the Clouston Effect is based on the players waking up, or based on the actual success of the program he's implemented, remains to be seen, but you can't argue with his success to date. Clouston has as 17 wins in 30 games; Hartsburg had 17 wins in 48 games. Clouston has a winning percentage of 61.7, Hartsburg's point percentage was 42.7 per cent. Clouston has re-energized the team, and it shows in their statistics since the half-way point of the year.

Runners Up: Craig Hartsburg (by default)

Alfredsson is not only the Senators' leader on the offensive side of the puck; he's also the best defensive forward on the team. He routinely plays on the team's penalty killing unit, often doing some of the flashiest penalty-killing in the league. He's Ottawa's only forward with a plus-rating. Not a common thing, but he wins most of the Senators' awards--Hart, Selke, Art Ross, Masterton, and gave Shannon a heck of a run for the Lady Byng.

And picks for the entire NHL: