No Habs No: Playoff Edition (or, How I learned to stop worrying and love the Bruins)

Share All sharing options for: No Habs No: Playoff Edition (or, How I learned to stop worrying and love the Bruins)

Going into the playoffs, I couldn't figure out what I should do for any players who'd score a game-winning goal against the Montréal Canadiens in the 2009 NHL playoffs. For the regular season, I sent one dollar in local currency to the player, along with a hand-written fan letter, but that just didn't seem right for the playoffs. Then it dawned on me: A Royal Canadian Mint-issued Commemorative Montréal Canadiens 100th Anniversary loonie. Once I'd found four of them, I wrote up the letters for the four game-winning goal scorers from the first-round sweep by the Boston Bruins, and voila; I had found a way for the Campaign to express our success in a succinct and ironic way.

Before I get into the letters, though, I think it's fitting to examine the success of the campaign. Some may not realize this, but the campaign began on November 22, meaning that the Habs had played 18 games prior, and assembled an 11-5-2 record in that span, good for a 66.7 points percentage. In the 64 games since then, though, the Canadiens assembled a 30-25-9 record, for a 53.9 points percentage, while the entire team came apart at the seams: Leading players scratched, injuries to key contributors, criminal "connections" and hardcore partying, a goaltending controversy, and a (good) coach getting canned (might sound familiar to Sens fans). But they eked into the playoffs, only to get unceremoniously swept by the Boston Bruins in the first round. All in all, I'd call the No Habs No! campaign an unqualified success.

Anyway, without firther ado, here are the playoff edition letters:

Beginning with Zdeno Chara, who scored the game-winner in the series-opening 4-2 victory on April 16, 2009: 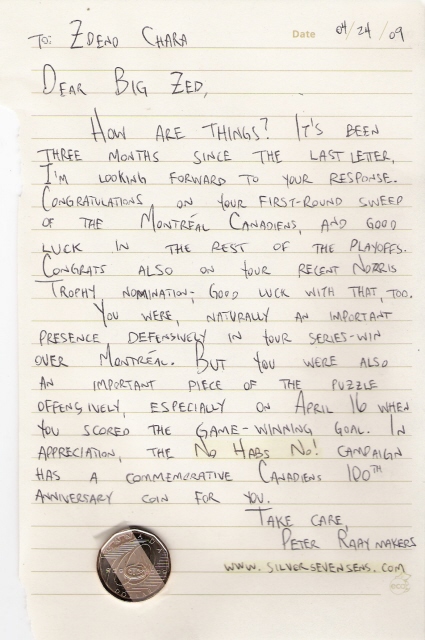 And next up is Chuck Kobasew, whose GWG was in the first period of April 18th's 5-1 Bruins victory: 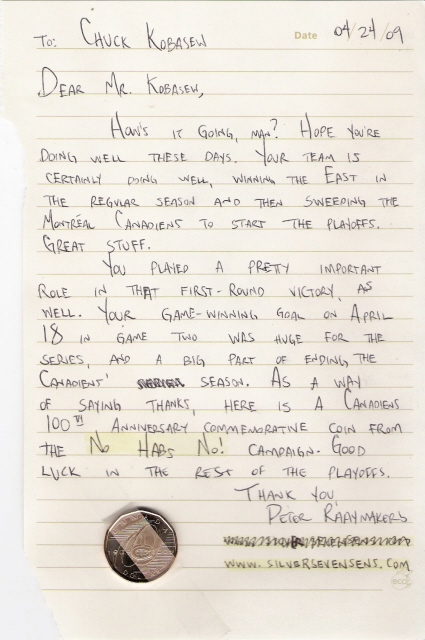 Thirdly, Michael Ryder, mostly for his game-winning goal on April 20 (a 4-2 victory) but also generally for his heroic seven-point (4G, 3A) series against the Canadiens: 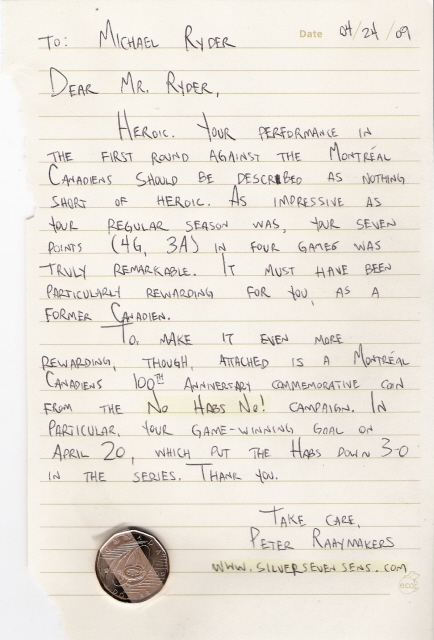 And finally, but far from leastly, is David Krejci, who scored the series-clinching goal on April 22 in the Bs 4-1 victory: 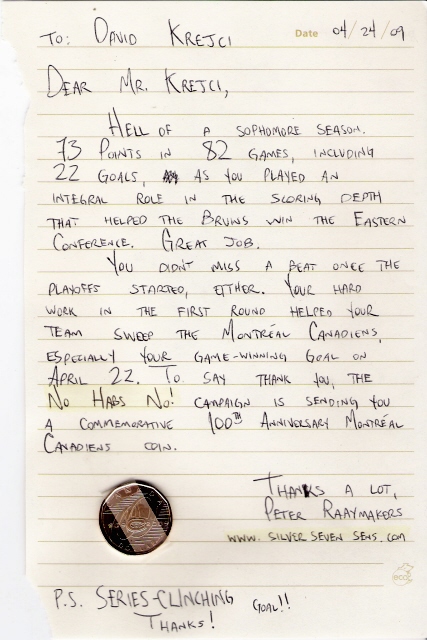 With the Canadiens now eliminated from contention, the campaign has sadly come to an end. However, if you'd like to support the campaign posthumously, feel free to do so in any of these ways: