In my many years of hockey, I've still never advanced from the wooden stick. I was always the most comfortable with it, and I'm not sure I'll ever change (until we run out of trees, that is). Still, when I was a kid, I yearned for an aluminum hockey stick. And of course, when it comes to aluminum hockey sticks, there's only one worth considering: the Easton Aluminum. 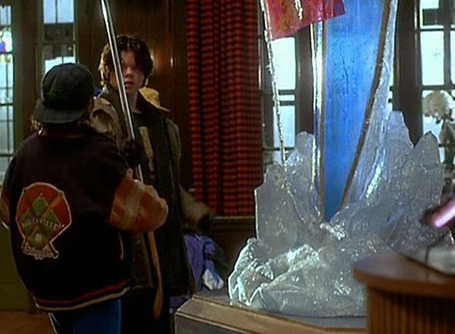 Back in my childhood, owning an Easton Aluminum instantly made you the coolest kid on the ice: it was the hockey equivalent to the Power Glove. It was the stick that you (theoretically) never had to replace, and you could change the blade whenever it suited your fancy. Moreover, it was the ultimate aid in performing the patented triple deke (just ask our friend Charlie Conway up there).

In the late 1970s, an Easton engineer who was an amateur hockey player began working on an aluminum hockey stick. In 1981, the company gained approval for its stick from the National Hockey League, and a marketable model was introduced a year later.

A major step towards acceptance came in the late 1980s when top goal scoring forward Brett Hull began to use Easton aluminum sticks on the ice, but the turning point took place in 1990 when superstar Wayne Gretzky, who had been traded two years earlier to the Los Angeles Kings, visited Easton to try its sticks. He liked the product so much that he agreed to a seven-year, $2 million endorsement deal, providing Easton with instant credibility in the hockey world.