The other Karlsson: Mattias

Share All sharing options for: The other Karlsson: Mattias 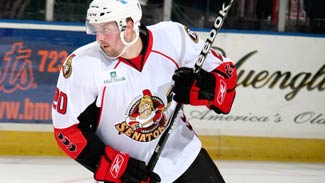 Everyone knows about 2008 first-round draft pick (15 overall) defenceman Erik Karlsson, and his newfound reputation as the saviour of the Ottawa Senators, despite the fact that he's still only 18 and something like 165 pounds.

But there's another Karlsson in the Sens' development system, and he's making headlines all his own: His name's Mattias Karlsson, drafted in the fourth round of the 2003 NHL Entry Draft (135 overall) and his most recent accolade was being named to the AHL's all-rookie team. Earlier in the year, Mattias was chosen for the PlanetUSA squad in the AHL All-Star game, and he lit it up with a goal and three assists as his squad beat Canada 14-11.

About a month back, the Senators' published a great story on Mattias, and the difficulty he'd had keeping his hockey career on track. In the summer of 2007, he was skating with a friend, but when that friend fell his skate caught Mattias in the leg, and the resultant cut tendon made the Sens prospect's 2007-08 season a difficult one. He played a couple of games in the AHL, but was sent back to Sweden, where he'd get more ice time than in the AHL. He put up reasonable numbers with a few teams, including 4P (2G, 2A) in 13GP with Farjestads of the Swedish Elite League.

When Mattias came back to North America for the 2008-09 season, he surprised a lot of people--myself included--who hadn't anticipated an apparently blue-chip defensive prospect to come out of relative anonymity to lead the B-Sens' defence in scoring. He's tied for seventh in league rookie scoring (49P), and second in rookie assists (41A).

Highlighting his play this season is his obvious maturity. The guy's married with child, for cryin' out loud, and that maturity in life reflects in his poise on the ice. In that Sens' feature, Binghamton Coach Curtis Hunt highlighted that poise as his greatest attribute:

"He's got tremendous poise with the puck. He's got that ability to move across the line, keep his head up, create some options," said Binghamton head coach Curtis Hunt.

In his favour, though, is his North American professional experience, the terrific season he's had so far, the maturity, an the cheap entry-level contract that he's still signed to. Plus, he wears number 20 for Binghamton; could the Antoine Vermette trade have been in part to clear that roster number for Mattias' inevitable spot on the Sens' blue line?