Share All sharing options for: Who calls an illegal stick?: Sens 2, Leafs 1 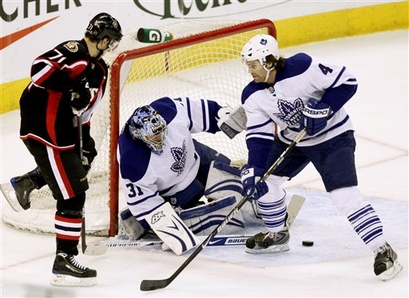 Monday's game sure fit it's billing: A battle of the basement of the Northeast Division. At least if it wasn't pretty, though, it was still a Sens win. And against Toronto, no less, made it somewhat bearable to watch all most some of.

Ottawa started off poorly, when Christoph Schubert made an untimely pinch in the offensive zone and Toronto's Ian White tucked a goal past Brian Elliott just before the five-minute mark. It was almost as ugly as White himself.

But in the last five minutes of the second, the Sens decided that they'd start playing well. Largely thanks to Daniel Alfredsson, who was the lucky recipient of a puck that bounced over White's stick and broke in on Curtis Joseph and wired a semi-knucklepuck high glove side. A few minutes later Alfredsson recovered the puck with a hit along the boards, Jason Spezza passed it back to Anton Volchenkov, whose shot was tipped by Dany Heatley and bounced past CuJo to give the Senators the 2-1 lead that was all they needed.

In nets, it was a surprisingly good battle, Elliott's one mistake aside. Joseph played surprisingly well--although he had some help from the posts--and made a couple good glove saves. Elliott wasn't outdone, though, and kept the door shut the rest of the night. Some pretty good saves for both, on the night.

What a game for Alfredsson. He earned (and I mean earned) first-star honours, not only for his goal--which was a solo effort--and his work on the second goal--which never would have happened without him--but just overall. One goal, 20:04 played, four shots, a hit, finished +1. Prototypical Alfredsson effort.

Back to Schubert, he's just frustrating to watch whenever he gets into the lineup. I'll give him a break on the pinch because he's been out of the lineup (and not playing defence) for a long time, and defensive pinching is something Cory Clouston is encouraging his guys to do (note in particular one Brian Lee pinch where he [surprisingly] smoked Jason Blake late in the second). Watching him, you see him skate well, shoot hard, and hit harder, but he's plagued by poor decisions and can't hit the net to save his life. Tonight he was -1 in 14:42, had five hits, and missed four shots--one blocked, three missed the net. I don't want him to get traded, I just want him to play as well as he can.

Who the hell calls someone on an illegal stick challenge? I'm not going to criticize Ron Wilson for doing so on Spezza too much, I guess, because he was right and it gave his team a chance to tie the game late, but really. Come on. A game between two teams that has absolutely no bearing on any playoff race? Whatever, man, if it helps you sleep at night. I think, for the record, the penalty was because the minimum stick-blade width is 2", and Spezza's looked pretty thin near the tip.

With Spezza off for that infraction, Jarkko Ruutu came up with a clutch penalty-killing move when he slid to tip the D-to-D pass out of the Sens' zone and down the ice. He also chased ot down and turned it over, almost scoring an empty-netter. A lot of people who don't watch him much think he's just a pest, but this guy's a smart player, too.

Quick note about Mike Comrie: This guy needs a bit more intensity. He's on a line with Chris Kelly, who can do little in the offensive zone, and Peter Regin, who's still getting comfortable in the league; if those three will offer anything to the Sens' offence, Comrie's going to have to be a lot more dynamic in his play.

Stats pack: Ottawa was outshot 10-4 in the third period. ... Jesse Winchester continued his progression into a solid bottom-six forward, with five hits (and he drew a penalty). ... Volchenkov was Ottawa best +/- guy, he was +2, and also had his assist, a hit, a takeaway, and blocked two shots. ... Mike Fisher blocked more shots than Volchenkov and Chris Phillips combined? Weird. ... Heatley only had two shots, and one of them wasn't even a shot, it was a tip. ... Ottawa outhit Toronto 28-26 and out-shot-blocked the Leafs 16-12.