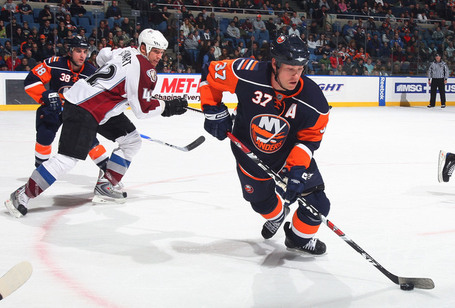 Dean McAmmond was brought into the Senators organization with little fanfare. As one of two free-agent signings from July 1, 2006, McAmmond's acquisition was overshadowed by the loss of Zdeno Chara that same day, and the signing of goaltender Martin Gerber to a three-year, $11.1M contract.

Quickly after joining the team, though, McAmmond showed himself to be a valuable role-player. He assumed a significant penalty-killing role under Bryan Murray, and played mostly on the fourth line. When the Sens ran into injury troubles in the 2006-07, McAmmond played a more significant role, bumping up to the third and even second lines at times.

The following summer, McAmmond was signed to a two-year contract extension. To celebrate, I shaved myself a McAmmond-Mohawk, and for Christmas 2007 I had a Senators jersey personalized with McAmmond's name. Under John Paddock, though, McAmmond was often underused or used in an unfitting role. The fourth line was virtually ignored by Paddock, and McAmmond--after receiving two cheap headshots and suffering two concussions in just a matter of months, McAmmond wasn't quite the same player. Still, he bounced back, and held a role on the team--particularly when Murray re-took the head coaching job late in the season.

That season brought about one of the most memorable McAmmond moments in Senators history. After Steve Downie jumped elbow-first at M.C. 'Ammer, Dean was interviewed and asked about the perception that he had 'concussion problems'. Quickly, McAmmond replied:

What a class act.

Through 2008-09, under new coach Craig Hartsburg, McAmmond once again had a larger role. Still, he wasn't given the same responsibility as he had on Murray's 2006-07 squad, and often looked like he didn't quite fit in with the struggling Senators for much of the season. His speed on the forecheck wasn't ideally suited to Hartsburg's conservative defensive style, and so McAmmond was not as effective as he had been. About to become an unrestricted free agent in the off-season, and it looked like the Senators weren't going to bring McAmmond back into the fold. On February 21, 2009, McAmmond was traded to the New York Islanders along with a first-round draft choice in exchange for Mike Comrie and Chris Campoli. Here are his all-time stats with Ottawa:

McAmmond has looked good for the Islanders so far. He has a more prominent role on the team, and has assumed a leadership role as an assistant captain. He's already scored two goals and three assists in seven games so far and, although the Islanders are virtually eliminated from the playoffs, McAmmond appears to be playing with renewed vigour. Apparently, McAmmond was an Islanders fan growing up, so perhaps this will be good for him.

Dean is an unrestricted free agent this off-season, so it's still possible he could re-sign with the Senators another stint in the red, black, and gold. If not, though, I wish Dean the best for the rest of his NHL career, and beyond. He'll always be an Ottawa Senator to me.

To see a few video highlights of McAmmond's Senators career, including his Stanley Cup Final game-winner, a fight with Max Talbot, and his prettiest goal in a Sens uniform, click 'Read more... ' to read below the fold.

Here's one great moment in Senators history, courtesy of McAmmond

The game-winning goal in Game Three of the 2007 Stanley Cup Finals against the Anaheim Ducks. McAmmond was a huge part of that playoff run, working with Oleg Saprykin and Christoph Schubert to make the Senators' fourth line a responsible, aggressive line that teams couldn't afford not to pay attention to, and that coach Murray could rely on even in tight situations.

And in that same playoff run, Deaner (after turning into "Hank", his rage-induced alter-ego) demonstrating the team camaraderie that was so evident. After Maxime Talbot blindsided a very vulnerable Patrick Eaves, D-Mac gave no hesitation before going straight after the Penguins' shift disturber:

Classic McAmmond fighting style: Arms hanging at the side, sort of like a gorilla or something, waiting for the right time. And, although he started out slow, you've got to give McAmmond the decision, for his late-fight resurgence and for literally coming out on top.

Final video homage, to perhaps the nicest goal of Deaner's Senators career, on January 6, 2008 against the Washington Capitals. After receiving a pass from Chris Neil, Dean split the Caps defence and roofed a backhand over Olaf Kolzig:

I will miss Dean in a Sens uniform.