Share All sharing options for: I want more of this: Sens 6, Sabres 3 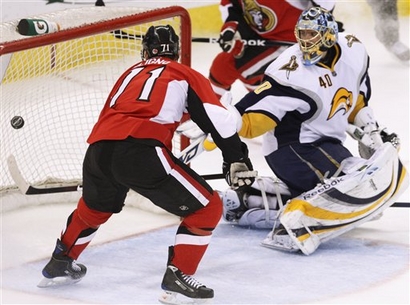 That was an exciting game. It always seems when the Buffalo Sabres are in town, the Ottawa Senators bring their A-game, and that was evident Saturday night. Even though Ottawa lost three one-goal leads, they kept skating and working to, eventually, score their first Pizza-offering victory of the year (for those who don't know, if Ottawa scores 6 or more and wins at home, everyone with a ticket gets a free slice of Pizza Pizza pizza).

Daniel Alfredsson opened the scoring on the powerplay less than five minutes into the game, walking in off the left side boards and sneaking a short-side shot past Patrick Lalime. Buffalo tied the game in the first, but Chris Kelly scored his eighth of the season off a shot from the slot to restore the lead, only to have Thomas Vanek tie it up again. Then Nick Foligno scored off a nice pass from Mike Fisher, but Jochen Hecht made it 3-3. In the third period, Ottawa took the lead for good, with Chris Campoli scoring the eventual game winner and Foligno and Alfredsson each adding second goals to round out the scoring.

Campoli's goal was a huge momentum change, but Foligno's second of the night salted the game away. Buffalo had committed on the play, but Ryan Shannon--who had two assists on the night--led a 2-on-1 and passed the puck over to Foligno for the tap-in. Pretty goal, and really put Buffalo down.

Special teams almost did Ottawa in, though. The Sens were a decent 1-for-6 on the powerplay, but the Sabres were an intimidating 3-for-5; had Ottawa taken a few more stupid penalties, or had Brian Elliott faltered at even-strength, this would have been a completely different game.

Continually impressive are the stats resultant from coach Cory Clouston's increasingly aggressive style. Ottawa had 15 takeaways in the game, compared to eight for Buffalo, and we're really starting to see the Sens return to their best form. Another thing, as mentioned by Garry Galley during the CBC broadcast, was that Clouston is giving defencemen like Android Volchenkov the freedom to step up on forwards in the neutral zone for bodychecks, and Volchenkov looks like he's loving it.

It's looking more and more like Peter Regin is an NHL-calibre player. He had an assist and was screening Lalime on Campoli's game winner, but his play away from the puck makes him pretty valuable. With a bit more work on his timing and positioning, he'll be able to avoid having to take penalties like the one he took in the second period. (His assist and penalty were both NHL firsts.)

Unfortunately, Jason Smith went down with an apparent knee injury after playing less than two minutes. Ottawa did pretty well playing with five defence the rest of the night, but it meant every defenceman played over 20 minutes, with Campoli leading the way with 25:44. Brendan Bell actually played 22:04, more (albeit slightly more) than even Chris Phillips, who played 21:44.

Stats pack: Alfredsson, Campoli, and Spezza each had five shots on net. ... Foligno took two faceoffs after his centreman was kicked out of the circle, and won both. ... Jesse Winchester and Smith were the only two Senators not to finish on the plus side of the +/- ledger, and both were even. Smith left early with that injury, though, and Winchester threw a huge hit on Jaroslav Spacek early in the game, so it's probably fine. ... Alfredsson's second goal was his twentieth of the season, making this the eleventh season he's scored at least 20. ... Phillips was +3, his best rating of the season. ... Campoli now has six points (2G, 4A) in seven games with Ottawa, compared to 17P (6G, 11A) in 51 games with the Islanders.