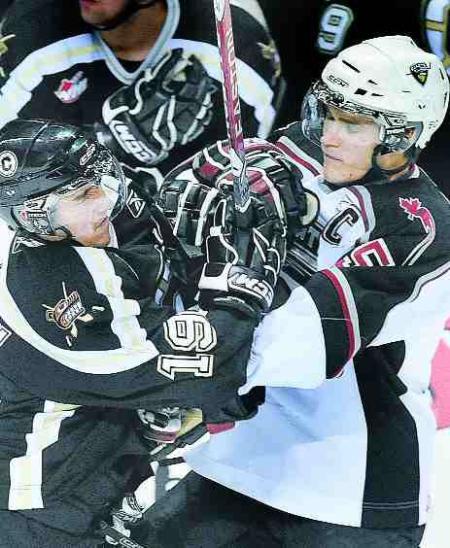 Just saw a report that the Ottawa Senators signed free agent defenceman Craig Schira to a three-year entry-level contract on Friday (link: The Province). Schira, 19, has been playing for the Vancouver Giants of the Western Hockey League this season, and is having a career year statistically with 16 goals and 40 assists (56 points) in 67 games. He's also +40 on the Giants team that is running away with the WHL's Western Conference.

Although I've not seen Schira play, he sounds like he has the attributes of a mobile defenceman. Judging by his stats, the fact that he has nine powerplay goals, and his size--5'11" and 196 lbs--Schira doesn't sound like a shutdown defenceman. As of Saturday, he was fifth in the WHL in scoring. He's also a right-handed defenceman, something the Senators' current NHL d-corps is lacking (Jason Smith is the only right-shooting defenceman currently on Ottawa's roster).

This is a typical Bryan Murray signing. Ottawa's GM often seems to find undrafted players, whether in college or in Canada's junior ranks, and often puts forward the best bid in bringing those players into the system. Last season, Ottawa signed Jesse Winchester to a deal, and he's really settling into a good spot on the Sens' fourth line this season. In the past, he's also brought players like Chris Kunitz, Dustin Penner, and Curtis Glencross from undrafted anonymity into regular NHLers.

It's obviously early to project where Schira might fit in the Senators' defensive depth chart, but one would expect he should have a good chance to play with the AHL's Binghamton Senators next season. Another good signing to further fill out the Senators' prospect system, particularly at defence.