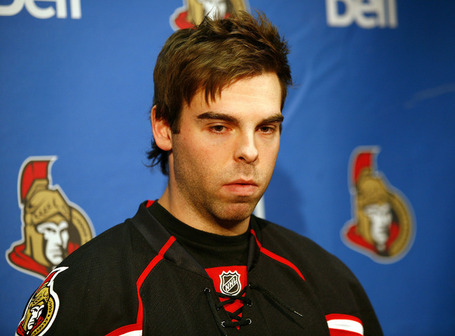 The Hockey News had their ranking of the top ten 2009 NHL trade deadline deals, and the Ottawa Senators' acquisition of Pascal Leclaire and a second-round pick for Antoine Vermette was ranked as the second-best of the day, behind only Calgary's acquisition of Olli Jokinen. Surprisingly enough, THN gives the advantage to Columbus for the deal:

2. Columbus acquires Antoine Vermette from Ottawa for Pascal Leclaire and a second round draft pick

This is a good deal for both teams, although since Columbus gives up a spare part in now-backup and oft-injured Leclaire, while adding depth at forward, we’ll give the decision to Columbus. Vermette will kill penalties and take a top-six position up front. Leclaire steps right into the No. 1 goaltending role in Ottawa and if he can stay healthy will be the best they’ve had in Canada’s capital since Dominik Hasek.

I agree with John Grigg, who wrote the article, that this was a good deal for Columbus. And certainly in the short-term, particularly for the 2008-09 season, Columbus wins by default: Ottawa hasn't actually received anything that will help them on the ice this year.

But long-term, this has to favour the Senators. Leclaire has the makings of a franchise goaltender, and is signed to a modest $3.8M cap-hit for two more years. The fact that GM Bryan Murray was somehow also able to get a second-round draft pick--and likely a mid-rounder (probably 40-50 overall) in what is touted as a deep draft at that--is just gravy that will help re-stock the Sens' prospect cupboard.

As with most deals, time will tell. Vermette was a valuable and popular player here in Ottawa, and I'm sorry to see him go--particularly since he was so emotional about leaving the city he's played his entire NHL career in. Still, at the prospect of an all-star goaltender and a good player for the future, this looks like Ottawa likely got the better player and the better value.