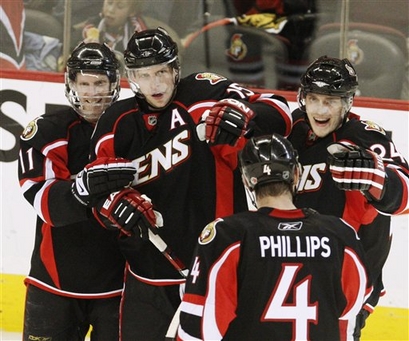 After just twelve seconds, I could tell it was going to be a good game tonight. Edmonton won the opening faceoff, but Denis Grebeshkov sent a weak pass across that was picked up by Jason Spezza, who went to the backhand to beat Oilers goaltender Dwayne Roloson. It set a Sens record for fastest goal to start a game, and Ottawa never looked back.

Mike Comrie scored his second as a Senator this season after a nice slap-pass from Spezza, and then Comrie added an assist on Chris Campoli's first goal as an Ottawa Senator. Edmonton's Sam Gagner scored mid-way through the second on a powerplay breakaway to make it 3-1 after two.

How the heck did Dany Heatley score that spin-and-swing goal top-shelf short-side mid-way through the third? I don't know. But it was sick, and gave Ottawa the three-goal lead until Gagner scored his second of the game late in the third. That's it for scoring.

Spezza, and in fact the whole CASH Line, played really well tonight. His goal seconds into the game was obviously huge for the team, but Spezza also had a great assist, five shots on goal, four takeaways (versus no giveaways), and was +3 on the night. Heatley had a goal and an assist and was +3, as well, but more importantly was moving his feet as well; just before his goal, he hustled all the way back to touch up the puck on an icing call against the Oilers, setting up the play which he scored on. And Daniel Alfredsson, with an assist and a +3 rating, was just Alfie.

Although Brian Elliott wasn't overly busy, he had a great game. He made one huge glove save to preserve the Sens' two-goal lead in the second, and smothered rebounds at key times to give his team a rest. He can't be very happy with the fact that the Senators acquired a top-flight goaltender yesterday, but all he can do now is play as well as he can and make Bryan Murray and Cory Clouston's decisions next year as difficult as possible.

What a play by Jarkko Ruutu. After he took a stupid interference penalty, he was at his most pestly, drawing Zack Stortini into an unsportsmanlike conduct penalty to offset his own. Classic.

I'm just listening to the newest Ottawa Senator on the post-game show, and a question occurs to me: Which is greater, Pascal Leclaire's excitement at the prospect of playing in Ottawa, or Antoine Vermette's depression at having to leave the Senators? Tough to say.

Quick hits: Peter Regin was 5-2 in the faceoff circle, which are Vermette-type numbers. He went down in the second period with an injury, no news on that. ... Apparently Shean Donovan, who only played 8:52, had a broken nose and continued playing. Considering it was a nothing game that was pretty much already won, that's heart. ... Jason Smith had three shots on net? Might be a career-high. ... Edmonton had 12 giveaways overall, and somehow Grebeshkov wasn't tagged with on; I counted at least three giveaways he committed. Ottawa had four giveaways overall. ... Virtually equal ice time for the Senators' d-corps tonight, with Campoli playing the least time with 18:33 and Chris Phillips playing the most with 22:25. Nice when your d-corps is solid enough to allow for that.