Silver Nuggets: Alfie for the Masterton, Murray lays blame, Ruutu does his job

Share All sharing options for: Silver Nuggets: Alfie for the Masterton, Murray lays blame, Ruutu does his job 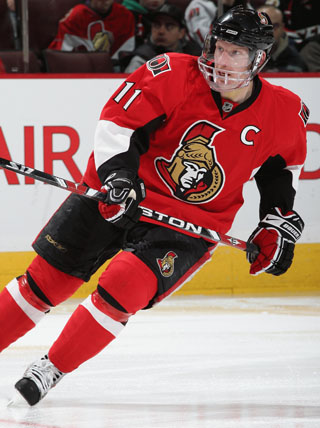 Daniel Alfredsson for the Bill Masterton trophy! He's the only Ottawa Senator player to have won a major award (he won the Calder in 1995-96, although coach Jacques Martin won a Jack Adams award once), so it's only fitting he be the second to do so, as well. The Sens announced that he's Ottawa's candidate for the trophy, awarded to the "player who best exemplifies the qualities of perseverance, sportsmanship, and dedication to ice hockey" and chosen by the Professional Hockey Writers' Association.

Two particular instances of his perseverance and dedication were his two injuries, a knee injury that required arthroscopic surgery and a jaw fracture that hardly held him out for one game each. I'm sure Scott Niedermayer has something to say about Alfie's sportsmanship, but who cares what he has to say. Alfie, from the Sens' official site, on his incredible ability to heal like no other human being:

"When you're the captain, you try to show and lead by example," he said in explaining his quick rebound on those occasions. "I'm not trying to be the hero. I'm just trying to push myself to come back as fast as I can. Sometimes it works, sometimes it doesn't.

Interview in USA Today with Sens' GM Bryan Murray about Ottawa's season so far, Craig Hartsburg, Cory Clouston, his trades, and the Sens' late-season push is pretty interesting. One thing that reeks of poor taste is what he said about "Hartsy", the now-dismissed coach who started the year in Ottawa:

To boil it down, did you believe Hartsburg tried to make your talent fit his style rather than making his style fit your talent?

Murray: Yes, basically that's what it was. Now, we have gone back to a more (puck pressure) style. We don't control the puck like the Detroit Red Wings, but we have the puck more often. We play a puck pressure more, and that's the way we've played in my time here. I like teams that score goals, and we were the lowest scoring team in hockey when Craig left.

Tough to blame the guy you hired for something you hired him for, Murray. When Hartsburg came in, he said he was going to implement a defence-first style; I find it hard to believe that he didn't suggest as much in his interviews. The Sens' biggest problem last season was keeping goals out, so Hartsburg was brought in to fix that. He did, but the Sens also had the side effect of costing us goals-for, and thus costing the Sens valuable points and games.

Murray should avoid blaming coaches he hired for the way the team plays. He's got to be as "accountable" for his decisions as he insists players be for their play, and he made the wrong decision with Hartsburg and with John Paddock last year. Simple as that.

"Craig's had two knee operations, so I don't think that was professional," Tocchet said to reporters after the game. "I have a suit on so I can't do anything about it. I wish I didn't have a suit on."

On Monday afternoon, the Senators agitator fired back at Tocchet, saying that the head coach of a last-place club should be concerned with other things.

"If I can get the coach rattled, it's a huge compliment to me," said Ruutu. "Maybe he should pay attention to his club. There's a lot more to worry about in his organization than me."

Say what you will, Ruutu is really good at what he does.

It was made official today: The Senators have re-assigned James O'Brien to the Binghamton Senators of the AHL. Read more here. His offence should help the team score some goal en route to, and once in, the playoffs.

In other prospect news, 2008 second-round draft pick (42 overall) Patrick Wiercioch finished his first season with the University of Denver. He's really played up his value this year, with some suggesting that he'd go in the first round if 2008's draft was done over. He's apparently 50/50 on returning to college or joining the Sens' pro ranks [Denver Post blog], but Wiercioch's comments to the Denver Post when his team was eliminated from the NCAA championships might indicate his initial wishes:

"I definitely thought my first season would end better and, if anything, it definitely motivates me to come back to win a national championship with the group we have coming back," Wiercioch said.

His stats as a freshman, all quite impressive for a defenceman:

Apparently, overall, the Sens are treated pretty fairly by NHL referees. NHL Fanhouse compiled a list of how often a team has been shorthanded versus how long they've benefitted from a penalty call, and Ottawa's right in the middle of the pack: 18th place, with a -4 rating. Not nearly as good as the leading Carolina Hurricanes (+64), but way ahead of the league-lowest Philadelphia Flyers (-84). Of course, some teams are more prone to penalties because of their style or because of their rosters, so it doesn't necessarily mean that Philly is being treated unfairly, or that opponents of the 'Canes are being treated unfairly, either.