All Flames before the fire sale: Flames 6, Sens 3

Share All sharing options for: All Flames before the fire sale: Flames 6, Sens 3 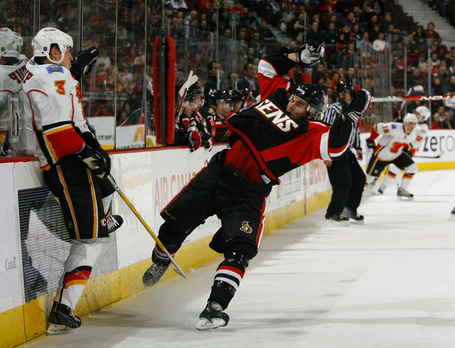 If you were looking for a few players to raise their market value on the night, you were probably disappointed overall--although I felt Filip Kuba, Christoph Schubert, Brendan Bell, and Antoine Vermette might have done a pretty good job of it, no one else did.

Especially not Alex Auld, although apparently he was started despite the fact that he is apparently fighting the flu. I don't understand that call from Cory Clouston, but it was the wrong one: Auld allowed four goals on 15 shots, and three of them were of the weak variety. Brian Elliot allowed one goal (to David Moss) on seven shots in the third, and Moss scored into an empty net for his first NHL hat trick and to round out the scoring on the night.

The Sens looked like they'd be in good shape after coming back from Jarome Iginla's first of two goals early on, when Kuba and Mike Fisher scored back-to-back goals to give the Sens a 2-1 lead mid-way through the first. A couple more weak goals by Auld, though--especially one from Warren Peters that squeaked short-side by Auld's feet--and the Sens couldn't rally back again.

I wasn't impressed by Jason Spezza overall--he was -3 and had four giveaways--but I've got to give him credit for standing up for a teammate. I didn't see him challenge Dion Phaneuf after Phaneuf hit Dany Heatley (although I'm sure I will on the highlight package), but at least it's some semblance of team solidarity. Tell me: Did he get rag-dolled?

Still, a couple of guys had good games. Kuba, his first pass of the game (which led to Iginla's first goal) notwithstanding, was solid and skated well despite being -2 on the night. He skated the length of the ice to score his powerplay goal, had three shots on net, two takeaways, two blocked shots, and one hit. It might have been is best game since the All-Star break.

Schubert had been a healthy scratch for the previous eleven games, but he came out strong and was skating pretty well. I actually was reminded of why I enjoyed watching him play forward: He's not going to blow anyone away with his skills (Exhibit A), but he'll skate hard and finish his checks. It'll be sad to see the last of our tremendously valuable 2007 Stanley Cup run fourth line let go (Oleg Saprykin and Dean McAmmond being the other two players), but he'll be better off for it.

Bell had two powerplay assists, and he was brought to Ottawa as a stop-gap powerplay quarterback; why's he on waivers? Sure, in 21:17 played he was -2, but he's still a good depth guy. If he goes to Binghamton, I hope he lights it up in the AHL playoffs and gets a heck of a deal next season.

As for Vermette, he didn't get any points, but he sure was skating. Three shots on goal, three takeaways, and 63% in the faceoff circle. I don't know how long we should continue looking to him to provide secondary scoring here before we decide it just won't work, but the other things he brings to the game--speed, penalty killing, faceoff domination--are pretty valuable, too.

Only a few hours now until the NHL trade deadline is come and gone. I look forward to seeing what Bryan Murray does with this team, and I hope it's of significance. Stay tuned here on Silver Seven and on the SBN NHL Trade Deadline hub for all the analysis you can ask for, and probably a little bit more than you want or need.