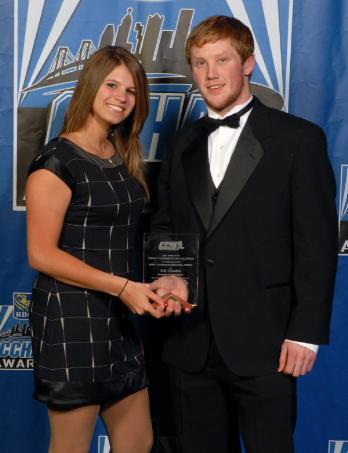 Here's some news on a few of the Senators' prospects outside of the NHL or AHL:

Erik Condra (2006, 7 [211]): Scored 13G, 25A, 38P in 39 regular season games. Won the CCHA Championship as a member of the UND Fighting Sioux, and will take on Bemidji Statein the NCAA Midwest Regional Final on March 28, 2009 [Ed. Note: They lost to Bemidji]. Won the CCHA's Terry Flanagan Memorial Award for perseverance, dedication, and courage.

Louie Caporusso (2007, 3 [90 overall]): Second-place in fan voting for the Hobey Baker Award (click here to vote) with about 21% of the vote so far. He scored 24G (first in the CCHA), 25A, 49P (second in the CCHA) in 40 regular season games. His Michigan Wolverines lost to the UND Fighting Sioux in the CCHA final, but will take on Air Force in the NCAA East Regional Final this afternoon (March 27) at 3 p.m. [Ed. Note: They lost to Air Force] He was on the CCHA All-Conference First Team, and a Perani Cup Winner (I think the Perani Cup is for game-star awards, or something).

Craig Shira (undrafted): Scored 2G and 3A as the Vancouver Giants swept the Prince George Cougars to move on to the second round of the WHL playoffs.

James O'Brien (2007, 1 [29 overall]): Scored one goal (his only point so far in the playoffs) in the Seattle Thunderbirds recent loss to the Spokane Chiefs in the WHL, putting the Thunderbirds down 3-1 in the series. Should the T-Birds lose, O'Brien may head to Binghamton for the AHL playoffs