Unless you grew up in my hometown, you probably have not heard of the Marsh Peg. Yet in every NHL game you watch, and most international games, these handy gadgets are what holds the net in place. Marsh Pegs are flexible enough that the net comes off its moorings to prevent injury, but firm enough so that the net doesn't slide around from every bump. It's the kind of great hockey innovation that even wins a Manning Innovation Award. 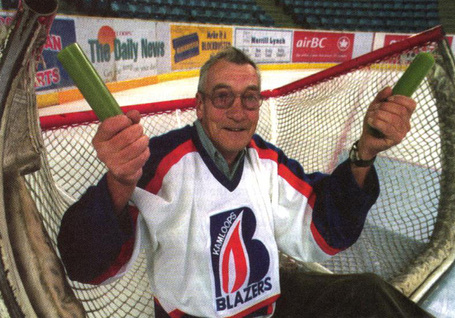 In that picture is Fred Marsh, the inventor of the Marsh Peg. Fred came up with the idea after watching Mark Howe get injured by running into a net that was too firmly in place. Four years after Howe's injury, the NHL switched to a new system - magnets. Unfortunately, these were far too loose, and the nets came off too frequently. Marsh recounts one particular memory:

"(Wayne) Gretzky was playing in Vancouver one night and they had the net come off, just as the puck went in," Marsh says. "And they ended up with a tie instead of win. I wrote Wayne at the time and said, 'You know, if they would've been using the Marsh Peg, they would have won the game.'"

In 1987, Marsh brought his flexible goal pegs, made out of a mixture of rubber and plastic, to the Moose Jaw Warriors of the WHL. Ed Chynowth, then president of the Western Hockey League, became a big supporter of Marsh Pegs, and helped draw the NHL's attention to the invention.

Finally, in July of 1991, the NHL made the Marsh Peg system the standard in every arena. Marsh joked that at 56, he was the oldest rookie in the NHL that year. They are still in use across the NHL, helping Shean Donovan and various other speedy net-crashers in the league avoid injury from helmet-on-net collisions.