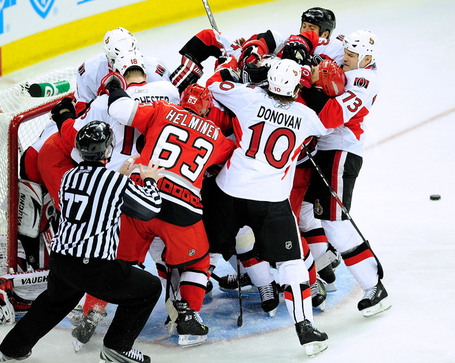 So much for winning out the season, and we're just about locked out of the playoffs; Nine games to make up nine points with three teams separating us from the eighth spot, it's getting pretty close to a sure thing. But hey, what's the fun of giving up?

The Sens' five-game winning streak came to an end in Wednesday's defensive showcase, with Carolina edging Ottawa 2-1. The Sens got the lead for a change, when Ryan Shannon jammed a sweet setup from Nick Foligno past Canes 'tender Cam Ward, Rod Brind'Amour tied it up and Anton Babchuck scored the winner on the powerplay.

The game was pretty much neck-and-neck until Ottawa took the lead, at which point either: a) the Sens stopeed playing as well, or b) Carolina started playing really well, because the Hurricanes dominated the last 18 minutes of the third. As good as Ward was for Carolina, I'd say Brian Elliott was even better, making some huge saves off great scoring chances to keep Ottawa in the game and give them a shot for the win. The Canes' first goal was a rebound his defenceman (Filip Kuba) should have cleared, and the second was a solid shot from the point through a screen that squeaked by Ells.

Aside from Daniel Alfredsson, who never looks bad, Ottawa's top line was outmatched tonight. Dany Heatley and Jason Spezza had moments of pressure, but were outplayed by Carolina's top line of Eric Staal, who had an especially good game, with Tuomo Ruutu and Erik Cole. Another mismatch was with Kuba against Brind'Amour, with the Canes' veteran routinely outmuscling the much larger Kuba for the puck, and getting a goal and an assist as a result. Kuba did, however, score an assist on the Senators' lone goal. I will give Spezza credit for being Ottawa's only centreman to win more faceoffs than he lost (he won 12 of 21) and Heatley for getting four shots on net, but they were still outplayed on the whole.

On the plus side for the Senators was Shannon's line with Foligno and Mike Fisher, who continued their solid play. Moreso Shannon and Foligno, who were Ottawa's only forwards on the plus side of the +/- ledger, combined for seven shots and four hits, and just kept buzzing all night long. Fisher had three hits of his own, but didn't have a single shot and was a disappointing 31 per cent in faceoffs (4-for-13).

Lots of credit has to go to Mike Comrie tonight, with two very gutsy and very painful-looking shot blocks. No matter what you might say about this guy's play on the Island, he definitely wanted it tonight, and may have been Ottawa's strongest player. And that's while playing most of the game with Chris Neil and Chris Kelly, the kind of linemates that would frustrate Wayne Gretzky at the best of times. Nothing personal against those two, but they can't finish to save their lives, and it's impressive that Comrie's not thrown in the towel with those two to work with.

While I'm at it, let's talk fourth line. Jesse Winchester, Shean Donovan, and Jarkko Ruutu didn't get a lot of ice time, but Winnie set Donovan up for what was probably Ottawa's best scoring chance through the first two periods with a slick little drop pass. And Ruutu was at his pestiest, highlighted by one front-of-the-net scrum in which he took down two Hurricanes with sleeper-hold headlocks from behind (see photo at top). I'm so glad he's on Ottawa and not an opponent...

I'm also going to give credit to Brendan Bell and Christoph Schubert for their defensive games tonight. I was criticized (perhaps rightly so) for commending Schubert last game, but tonight I think he played well defensively once again. Even with only one hit, and one time where he was demolished by Tuomo Ruutu, he played well for the Sens. As for Bell, he had two great defensive plays early in the game, and finished with three takeaways (to zero giveaways) plus two blocked shots. He's definitely playing hard to earn that new contract.

And I can't get by without crediting Anton Volchenkov. Four blocked shots, three hits--including a great hip check on Cole. It was your typical Android-style game, but sometimes it's easy to take it for granted.

Oh well. It was a good game, not Ottawa's best, but still entertaining. We'll see how the final nine games go, and what else happens in the playoff races. There's still a ridiculously slim chance.