Tough luck for the Senators' playoff hopes last night, because of these damned three-point games. Carolina defeated Florida 2-1 in overtime, giving both of those teams more room ahead of the Senators in the standings. Here's how the Race for Eighth (originally coined at Die By The Blade) looks right now:

Still, after the way the first half went, it's just nice seeing people mentioning the Senators and a playoff race in the same sentence.

On the Forecheck has been compiling a league-wide penalty plus/minur rating, taking the number of penalties drawn by a player and subtracting the number that player is assessed. Ottawa Senators' rookie Jesse Winchester has a +12 rating, 42nd in the league and miles behind Los Angeles' Dustin Brown's league-leading +52 rating. Daniel Alfredsson isn't far behind Winchester with a +11 rating, and Nick Foligno is +10. Chris Phillips is apparently the worst for the Senators with a -21 rating, but I think that there's a bit of a positional bias to this statistic; the bottom 20 players are all defencemen, and only 14 defencemen are in the league's top 250 penalty plus/minus players.

Cool post on The Goose's Roost, a Buffalo Sabres blog (ugh), comparing the Senators to the Sabres, and it almost sounds like a Sabres fan wishes his team was where Ottawa is right now:

But are the two teams really the same? Well, no. See, Ottawa went out and did something about it. They were a decidedly worse hockey team a few months ago. Much, much worse. So they made a coaching change, started to retool, and got better. All of a sudden they are 9-1 in their last ten, destroyed the Sabres in the season series, and have something to look forward to next season. They kept their core intact yet made a few moves, and will be a better hockey club for it down the line.

That is where the Sabres have failed. There is no movement, no advancement or regression. This team is in a state of atrophy, and the numbers will reflect that lack of movement in a few weeks. The Sabres may be in the same position as Ottawa in the East, but you’d be hard-pressed to convince me the Sabres are in better shape overall.

TSN's Scott Cullen rated the NHL's top rookies for 2008-09 over on his Backchecking blog. Columbus goaltender Steve Mason tops the list, and Sens defenceman Brian Lee is the highest Senators' rookie at #31. The rest of the Sens on the list: Brian Elliott (33), Winchester (68), Peter Regin (81), Cody Bass (86), and Ilya Zubov (95).

As Ben from Sens Army Blog points out, No Habs No! has gained mainstream media coverage, even if La Presse doesn't acknowledge it: 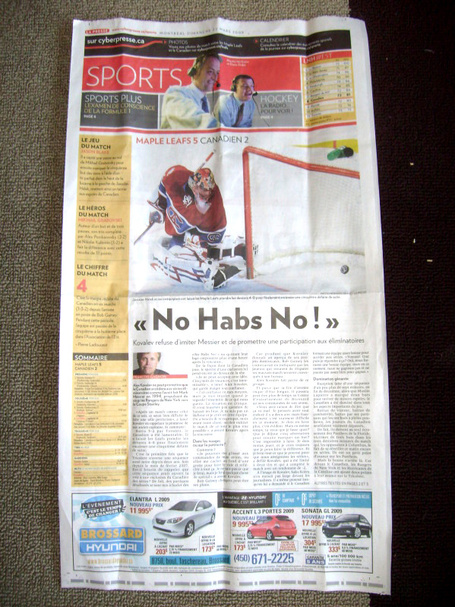 “The other night he had a huge blocked shot and got the puck out when we were trying to defend a lead,” said Clouston of Shannon’s two-way pattern of late 2008-’09. “He’s had to learn to do the other things very well, because he is not a big guy. And one of his assets is his intelligence.”