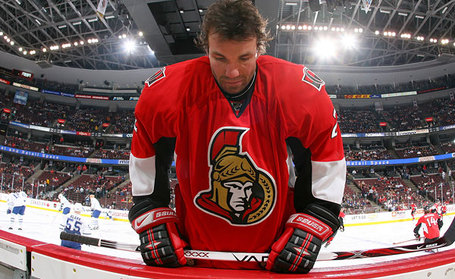 The reason for Mayor Larry O'Brien's declaration, aside from a great photo op for a mayor who needs some good public relations? Why, it's because the EOJBHL's Ottawa West Junior Knights are putting Richardson's name and number (21) up into the rafters at their playoff game tonight, of course!

After playing a couple games for Ottawa earlier this season, Richardson retired from the NHL and transitioned into an assistant coaching position with the Ottawa Senators. So let's all celebrate Luke Richardson Day by bodychecking someone on the street, or havign our noses broken in a fight.

Other fun things that happened on March 23: