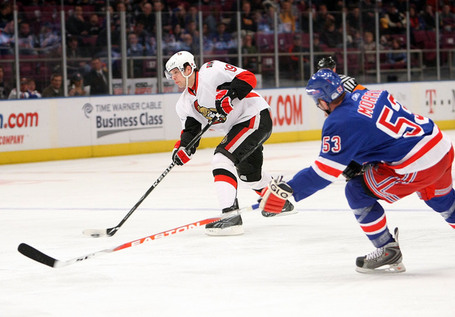 Five in a row, and nine of ten. This team sure knows how to get a fan excited, although it's disappointing to think how unlikely the playoffs are, even if the Sens keep winning.

The latest win of the streak was Sunday night's 2-1 come-from-behind victory over the New York Rangers, halting the blueshirts' winning streak at four. New York's Brandon Dubinsky opened the scoring with a goal 2:18 into the game, but Mike Comrie tied it up in the second and Ryan Shannon gave Ottawa the lead for good in the third. It was a bit of a snoozer, but a win's a win.

So much a snoozer that the teams combined for 51 shots (29 for New York, 22 for Ottawa), with only 13 in the first period. Ottawa was outshot 13-4 in the third, but Alex Auld held the Sens in for the win. Auld played pretty well, particularly in that third period when the Rangers were really pressing and he had to make a few solid saves. This goaltending situation, with Auld as well as Brian Elliott and Pascal Leclaire, just keeps getting more interesting.

Something that was brought up in the game's TSN telecast was the Senators' increased production from the blue line: Including assists from Chris Phillips and Chris Campoli on the Sens' first goal, Ottawa has had 33 points from defencemen in the last 11 games. Pretty good stats for a d-corps without an elite puck-mover on it; the Sens are just offering defensive-offence by committee, with Phillips, Campoli, Filip Kuba, and Brendan Bell (whose point scoring streak ended at three games) helping the Sens get some goals.

I also feel it necessary to mention that Campoli also had three penalties, and a game-high five shot-blocked. And, in an odd occurence, his assist came when he wasn't even on the ice (he must have passed the puck and headed right off for a line change), meaning that he finished the game a -1 overall. I don't imagine that happens very often.

Although the Sens' powerplay was 0-for-3 on the night, they were perfect of the penalty kill, making it through six short-handed situations. With Anton Volchenkov out of the lineup, Phillips played 5:25 short-handed, Brian Lee played 4:55, Kuba played 4:38, and Christoph Schubert played 4:10. Schubert had played wing last night, but was bumped back to defence for Android, and--although he was -1--is starting to look more like the flexible, capable swingman that was signed to a two-year contract in the summer of 2007. He had a game-high seven hits, without risking his positioning, and blocked two shots as well.

So... let's not get crazy here, but Ottawa passed Toronto with the win, and the Senators are now seven points from the last playoff spot with 10 games remaining. It's highly improbable, bordering on impossible, even for the hottest team in the NHL right now--and especially with the next five games, and seven of the final ten, on the road. Still, why write it off until it's written off for realzies? 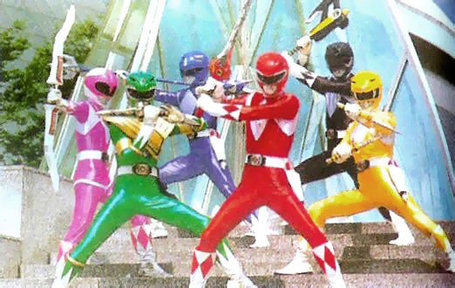