Share All sharing options for: Silver Nuggets: Caporusso a Hobey finalist, Sens' solid second half, and the Caps clinch 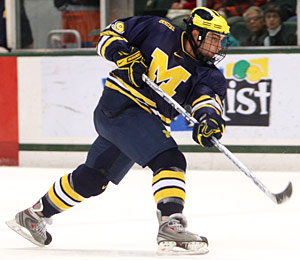 According to the Western College Hockey Blog, Ottawa Senators prospect Louie Caporusso is one of ten finalists for the Hobey Baker Award, honouring U.S. college hockey's top player. He was drafted in the third round (90th overall) pick in 2007, and currently playing for the University of Michigan Wolverines, and here's his bio on the Hobey Baker website:

Evolving into a prolific goal scorer, Louie leads the CCHA conference in goal scoring and is presently 3rd in points. On a national level, his 23 goals and 23 assists in 38 games places him tied for 9th in total points and tied for 5th in goal scoring. Named to the CCHA First Team for his efforts, he is finishing with a flurry collecting points in seven of his last eight games (1-12) and has helped Michigan to a top five ranking and second place finish in the league.

Pierre LeBrun compiled the league's top teams for the NHL's second half on his ESPN blog, and look who's right up there: The Ottawa Senators. With their 15-9-4 record in the second half of the season, the Sens have a .607 point-winning percentage, good for seventh in the league (as of March 18). Just think of how much more exciting this time of year would be if that percentage was since September...

According to SportsClubStats.com, the Washington Capitals are the latest team to clinch a spot in the playoffs. They can still finish as low as eighth place, but--because of intra-conference games--there's no way for enough teams to pass Washington to knock them right out.

Last night's Senators victory over Montréal boosted Ottawa's playoff chances up to 0.262%, but it dropped the Habs to 78.463%, an 8.1% drop (the drop is also high because the Florida Panther beat the Maple Leafs last night, so they're only one point behind the Habs for eighth in the East now).

Article in the Ottawa Citizen about the league's rookie coaches making some serious noise. Ottawa and Pittsburgh, with Cory Clouston and Dan Bylsma, are the standard-bearers for success with young, internally-promoted coaches taking the reigns, adn both hope to follow in the footsteps of Bruce Boudreau, who was brought to Washington from their AHL team last season.

You've got to wonder if this is a changing of the guard in the NHLs coaching ranks. The game has certainly changed in the last few seasons, and it looks like this new class of coaches are best-suited to the new style of game. Boudreau, Clouston, and Bylsma all came into their roles and let their teams play a fast, aggressive, offensive style, and their teams responded with a renewed excitement for the game. Time will tell if the rest of the league follows suit.