Give Elliott a break

Share All sharing options for: Give Elliott a break 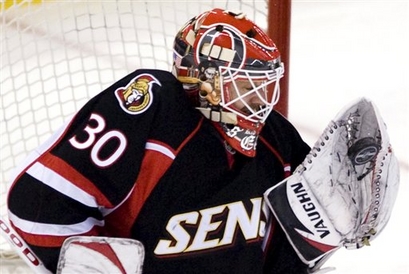 Wow. A few bad games in a row, and already your future with the team is uncertain. Forget the fact that the whole team has been playing poorly for over a calendar year, that the playoff race is out of reach and the games virtually meaningless, and that it's his rookie season: Brian Elliott needs to come in here and make some miracles happen.

At least that's the impressions I got of Allen Panzeri's column in the Ottawa Citizen today. Panzeri cited four consecutive bad games from Elliott, apparently ignoring the fact that the rookie goaltender still has a 7-4-3 record, a GAA of 2.84, and a SP of .905. I guess his most recent four outings, though, are more than enough to offset what are pretty decent numbers.

Panzeri goes as far as to question whether or not "The Elliott Experiment" has come to an end in failure, after seeing the young man play less than 20 NHL games:

"Does Elliott really have a future with this team? Can he even be put back in net for another game this season?

"His teammates lined up to protect him (Daniel Alfredsson called the winning goal "a fluky one"), and coach Cory Clouston talked about how Elliott was "a young guy battling through some adversity and facing some big-time pressure" and was going "to have to show his character."

"However, Elliott seemed to suggest it was just a matter of being a 'little inconsistent.'

Panzeri interprets that quote from Elliott as distant from reality. I think it's just the kind of thing a goaltender in Ottawa needs; We've already seen Martin Gerber and Patrick Lalime be eaten alive by guilt associated with weak goals they've allowed. Maybe a goaltender who, rather than letting weak goals wrack him with guilt, simply moves forward with a renewed mandate to work harder to get better is exactly the kind of attitude we need in Ottawa's nets.

Seemingly to cover his butt, Panzeri waits until after he's finished comdemning Elliott (because, apparently, the kid now "can barely stop the puck") to acknowledge that GM Bryan Murray needs a larger sample size before closing the book on Elliott:

"[Murray]'s certainly not going to make a decision on Elliott based on only 16 NHL games."

Let's take a step away from the ledge here, folks. Sure, Elliott has played poorly in the last few games. No doubt. But he's been thrown into the lion's den here, onto a team in the midst of a terrible season, and a team which--eliminated from the playoffs, in all realism--has nothing to lose.

Sending Elliott to Binghamton to make an AHL playoff run may be good for his development, but let's make sure we're not talking about a demotion--it would be more a reward than anything.