Share All sharing options for: Best spoilers ever: Sens 5, Habs 4 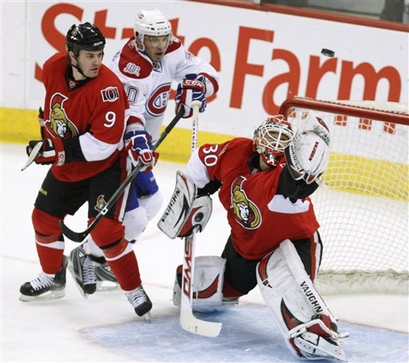 I can finally breathe. It was a close call for the Sens, as they let the Habs claw back into the game three times (each time Ottawa took a two-goal lead, Montréal closed that gap). Thanks to some shot-blocking heroics from Ryan Shannon, though, the Sens were able to kill off a late penalty and hold on for a 5-4 victory.

Montréal went up 1-0 early when Guillaume Latendresse scored, but Nick Foligno tied it up less than a minute later with Ottawa on the powerplay. Jason Spezza scored a pretty goal, backing up with the puck and tucking it five-hole on Carey Price, on the powerplay, and then Spezza tipped in an Android Volchenkov shot for his second of the night to give Ottawa the 3-1 lead. Alex Tanguay pulled the Habs within one early in the second, but a couple of minutes later Jarkko Ruutu roofed the puck over Price just inches from the goal line to put the Sens up 4-2, and Price got yanked in favour of Jaroslav Halak. Halak gave Montréal a bit of a boost when Latendresse scored his second, but Daniel Alfredsson made it 5-3 when he tipped in a rocket from Chris Phillips. Tom Kostopolous made it 5-4, but they couldn't get any closer.

Let's start with Alfredsson. Obviously, the game-winning goal makes him the first Ottawa Senator to contribute meaningfully to the No Habs No! campaign, and so he's going to receive the appropriate prize: A mint-condition Canadian one-dollar bill. He also had an assist, was +2, and was a huge part of the Ottawa PK group that killed all four opportunities that Montréal had. Really, he was just being Alfredsson.

Foligno scored Ottawa's first goal, and he could have had a couple more in that first period--including a breakaway thanks to a sweet pass from Shannon. He was buzzing all over the ice, finishing checks and forechecking hard; basically, just playing the style he has to play

Looking at the stats line, it's pretty obvious to see Spezza had a good game, too. Two goals, an assist, +1, four shots, and won 15 of 24 faceoffs he took. He had one potentially deadly brainfart when he tried to carry the puck out of Ottawa's zone late in the game with Montréal's goalie pulled, but we were lucky enough that Ottawa didn't pay for his mistake.

Brendan Bell was -2 on the night, but didn't have a bad game. Defensively, he made one great play in the first to prevent a clean break for Montréal, and he had two assists, two shots, two hits, and two blocked shots.

On the Sens' blue line, though, Phillips and Volchenkov were as strong as ever. Their offensive contributions--Phillips 2A, Volchenkov 1A--were gravy, but their defensive play really helped keep the Habs' bigger scorers off the scoresheet: Four hits and six blocked shots combined, and some solid work on the penalty kill. One of Volchenkov's hits was also a huge won that knocked Max Pacioretty on his can, and the Habs forward took a penalty afterwards.They looked like the pairing they were in the 2007 Cup run, but with a bit more offensive input.

Although Brian Elliott let in four goals, he was good at times in the net. Latendresse's second goal was weak, but Elliott came up big when the game was 1-1 in the first period, giving the Sens the opportunity to take the lead. He also stopped all seven Montréal shots in the third, when the Sens were up by one and any goal would likely have been devastating. The win was his seventh in a row, setting a franchise record for most consecutive victories by a rookie goaltender.

Montréal's most productive line was the combination of Latendresse with Kostopolous and Maxim Lapierre. They combined for 6P (3G, 3A), but I attribute it (at least in part) to a mismatch of lines: Those three for Montréal are large, fast, and physical, and they matched up with Chris Kelly between Chris Neil and Ruutu for their first and third goals, and Spezza was on with Neil and Ruutu for their second. The mismatch was a result of Neil being slow, Kelly being apprehensive, and Ruutu being out of position finishing checks. For the third period, Neil was bumped in favour of Shean Donovan--some good on-the-fly coaching by Cory Clouston--and that Lapierre line wasn't as effective in the face of stronger checking.

Although it was a very close game, the Sens dominated in most statistical categories:

This must make things awkward for Bob Gainey. As far as I can tell, he had one reason for firing Guy Carbonneau: Carbo was playing Halak in favour of Price. Price had faltered, the Habs were winning with Halak in nets, and Carbo seemed reluctant to play Price in order to keep things going the right way. Gainey proved last season when he traded Cristobal Huet, though, that his team was going to live or die with Carey Price. Tonight he had to pull his guy, though, and Halak looked a hell of a lot better than Price did.

That was seriously like a playoff game. And it was, in my opinion, Ottawa's biggest game of the season. Now, to write a letter to Alfie...