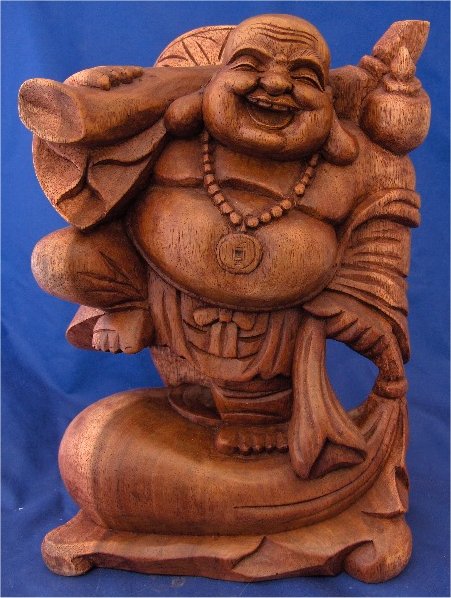 Everyone should remember the Buddha. It was Tom Chorske's good luck charm when he was a part of the first Ottawa Senators team to make the post-season. Five For Smiting is suggesting that after a convincing 4-2 victory over the Sabres maybe we should take it down off Chorske's shelf, dust it off a bit, and see how much luck is left in the old fella. Here's the story (from the Globe and Mail), if you don't remember:

The spring the modern Senators finally reached their first playoffs, they didn't give credit to the coaches or the goaltender, but to a tiny little wooden Buddha that forward Tom Chorske was carrying around in his shaving kit.

But hey, even if the Senators don't quite make the playoffs, they can cause some damage on their way by playing spoiler. And that's exactly what Albanada over at Sens Buzz is hoping for in his newly-launched Operation Spoiler-iffic. If I understand the rules properly, all you've got to do is e-mail Albi to join the contest and, if you choose a Sens player who scores a game-winner against a team in contention, you could win $5 and an Operation Spoiler-iffic poster. There have been rumours of Gino Reda mugs, but those are unconfirmed.

Similarly, if the Senators don't make the playoffs, they can't blame injuries. In fact, according to statistics compiled by James Mirtle at From The Rink, the Senators have been pretty good in terms of man-games lost to injury over the last four seasons (knock on wood, holy shit, I hope I'm not jinxing anything):

In fact, averaged out over those four years, Ottawa's had the league's best luck in terms of man-games lost to injury. But it's a decent excuse for the Islanders, who could lose 1567 over the last four years is the projections are accurate.

Kanye West, Will Ferrell and Eva Mendes. What do those three people have in common? They are the three people, living or dead, that Pascal Leclaire decided he would invite to dinner. You can learn that and more in a Q & A on the Senators' website.

Ottawa's CASH Line is only the seventh-best in the league, according to The Hockey News' John Grigg. In other years, Jason Spezza between Daniel Alfredsson and Dany Heatley would be right up in the running for top spot, but I've got to say there are some mean combinations on that list. Detroit's Johan Franzen-Pavel Datsyuk-Tomas Holmstrom line came in first, which is alright I guess.

And hey, did you know there's a hockey card show? There is! Or at least a hockey card-themed vlog that calls itself The Hockey Card Show. It's a couple of guys who break old packs of hockey cards and take shots for random things, like pullin a Rob DiMaio. Pretty good stuff, especially if you are kind of still interested in hockey cards even though your girlfriend says it's a really nerdy waste of money but I keep doing it for the suspense of maybe pulling a game-used Daniel Alfredsson patch card.