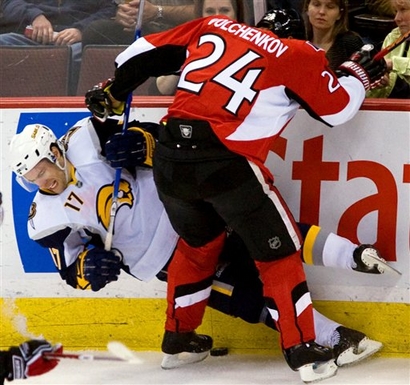 It was an ugly first period that saw the Senators go down 2-0, but in the second period--with the benefit of five powerplays--Ottawa outshot the Sabres 13-1 and scored two goals to tie the game going into the third. Two more goals in the third and the Senators nabbed their second straight come-from-behind victory.

Brendan Bell had a huge role in the Senators' victory tonight. His playmaking was the bright spot of the Sens' powerplay, and he scored the Sens' second and fourth goals on the powerplay. He made the play on the Sens' first goal, too, breaking the puck up the ice and pursuing it, but the league only gives out two assists, and Bell passed to Chris Neil who passed to Jason Spezza who tipped it to Dany Heatley for an easy goal. Bell ended up with 20:46 in ice time (including 8:46 on the powerplay) and four shots on goal.

The powerplay was a regrettable 1-for-7 through the first two periods, but Daniel Alfredsson--off of an incredible saucer pass from Spezza--and Bell's second goal gave the Sens a final PP success rate of 3-for-9. Playing with Bell on the first powerplay unit, Filip Kuba got three assist in the Sens' three powerplay goals. Considering Ottawa had nine powerplays and the Sabres had four, the Sabres (or the refs) gave Ottawa all sorts of opportunities to win the game. Back on the Sens' powerplay is Neil, sticking himself in front of the net to generate some traffic.

The Sabres only had 13 shots on the night, but Brian Elliott was strong on three penalty kills in the third period to keep the Sens in the driver's seat. More than the win tonight, though, is the fact that it was Elliott's sixth consecutive win, tying a Senators record for a rookie goaltender [EDIT: It's definitely a Senators franchise record, and may be an NHL record.]. What would a Senators season be without a goaltending controversy? I guess it's better having to choose between goaltenders playing well, hopefully.

You probably noticed Jesse Winchester as a new addition to the Senators' penalty killing group since the departures of Antoine Vermette and Dean McAmmond, and he's done well so far. Tonight he had more PK time than any other forward (3:10), and was second on the team to only Anton Volchenkov (3:43).

Mike Comrie was out of the lineup with the flu, so Christoph Schubert came into the fourth line. Schubert had a couple of hits in 7:14 of ice time, and the fourth line with him, Winchester, and Shean Donovan did some pretty good work when they were on the ice. Plenty of speed, and lots of physicality, even if that team might have a hard time scoring goals.

Stats pack: Ottawa had as many shots in each of the first and second periods (13) as the Sabres had in the game. The Sens finished with 36 shots on goal. ... Don't look now, but Brian Lee was tied for the game-high with four hits; where did this physicality come from? It's a good thing, though. Neil also had four hits. ... Dominic Moore was +1, but he still doesn't have a single point in six games since joining the Sabres. ... Spezza had three giveaways, sure, but he also had five shots on net, one incredible pass, two assists, and was 60% in the faceoff circle. ... Alfredsson now has 7G and 13A (20P) in his last 10GP. ... Jaroslav Spacek had five blocked shots on the night, and no Senator--not even Volchenkov--had more than one. ... With his two goals, Bell now has 6 in his Ottawa Senators career, good for a three-way tie with Stan Neckar and Alex Picard for 22nd in all-time Senators defencemen scoring. ... Spezza's now had 405 points with the Senators, five points behind Wade Redden for third in all-time Senators scoring. One more goal and Spezza (now with 401 career goals) ties Shawn McEachern for sixth in all-time goal-scoring.