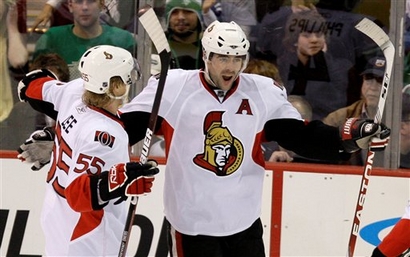 I didn't think the Ottawa Senators were as bad as they looked under Craig Hartsburg earlier in the season. An almost-comeback when down 4-1 against the Boston Bruins on Thursday was pretty cool. Tonight's full comeback after going down 3-1 to the Pittsburgh Penguins was even better, as the Sens rallied back in the third and won the game in a shootout.

Pittsburgh took a one-goal lead when Eric Godard beat Brendan Bell and his pass went off Jesse Winchester's stick, but Chris Campoli tied it at one when he scored on a bouncing knucklepuck that tricked Marc-Andre Fleury and snuck in. The Pens took another lead and added to it in the second off goals from Sidney Crosby and his ugly twin brother, Tyler Kennedy. In the third, Nick Foligno scored from the left faceoff dot with three other players screening Fleury, and Chris Phillips pinched in on the play a couple of minutes later to knock in a mid-air rebound to tie the game. No goals through overtime, and goals from Daniel Alfredsson and Mike Comrie in the shootout, plus four stops on five shooters by Brian Elliott, gave Ottawa the win.

Elliott was terrific in the Senators net. The first goal was bad luck, and the other two were really no fault of his. He made some terrific saves, particularly a pad-save on Bill Guerin during the Penguins' early first-period powerplay to keep the game tied. In the shootout, he stopped NHL leading scorer Evgeni Malkin as well as Kris Letang, Petr Sykora, and Chris Kunitz. On the night, he stopped 27 of 30 shots, and he's a very respectable 12-4-3 on the season now.

This game was characterized by either terrible powerplays, or amazing penalty-killing: The teams combined to go 0-for-12 with the man advantage (Ottawa went 0-for-7, Pittsburgh went 0-for-5). Elliott made a couple huge stops in first period powerplays, though, and Ottawa hit two posts--Alfredsson and Filip Kuba each ringing iron--on the same 5-on-3 powerplay in the first period, so maybe it was good (or lucky) penalty-killing.

Android Volchenkov left the game in the second period with another malfunction, and the Sens finished the game with five defencemen. With Jason Smith and Alex Picard already on the shelf, possibly for the rest of the season, Volchenkov's injury makes it pretty tough for an already-struggling defence corps. He's day-to-day, but if he can't play Tuesday, Christoph Schubert will likely draw back into the lineup.

Alfredsson did a standard fake-forehand, draw-the-goalie-into-a-pokecheck, go-backhand move (you know, no big deal), but Comrie had a tricky shootout move. He cut across Fleury and looked a bit like he was going to try a spin-o-rama, but then just shoved it in far-side. Take a look at the video:

Stats pack: Ottawa had eleven shots in the five-minute overtime period; Pittsburgh only had one. ... Phillips' game-tying goal was his 200th career point, and Ottawa is 37-6-5-1 whenever Phillips scores. ... Alfredsson game a freakin' game-high eight shots on the night. Dany Heatley and Mike Fisher were tied for second with five each. ... Pittsburgh officials credited the Pens with 30 hits to Ottawa's 22, but take that with a grain of salt; they also credited Brian Lee with four, and I don't know if he's had that many all season. ... Shean Donovan had 3:55 tonight. That was probably because of a fair amount of special-teams time, but he can produce plenty of energy if he's given some ice time to do so.