Great Hockey Innovations is another new feature here at Silver Seven Sens. Periodically, we will look to some invention, rule change, or idea that has, in some way, improved the game of hockey or the lives of those who play it.

The Hockey Tree could refer to two things: an invention for drying hockey equipment, or a children's book by David Ward and Brian Deines. I am referring to the former. 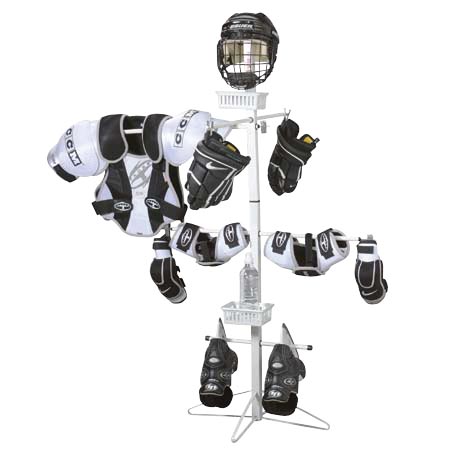 The Hockey Tree is a stand designed to help foster proper ventilation and drying of hockey equipment. There are a variety of different models under different names, but the general idea of the Hockey Tree remains the same: a vertical pole with various branches upon which you rest your hockey gear so that it can air out, helping to reduce that terrible feeling of putting on moist shin pads at your 5am practice. Though there were many general-purpose sports equipment drying racks available before the Hockey Tree, this one was developed with the great sport of hockey in mind.

There does not appear to be anything written about the history of the Hockey Tree, so I had to do a bit of searching. After looking at patents, I've found what appears to be the first commercial Hockey Tree product. Developed by Frank Mallen of Dollard des Ormeaux, Quebec, and patented in early 1994, this "rack for drying/hanging sports equipment" certainly appears to be the Hockey Tree. What almost confirms this is that its assignee is Malenger Inc., who also happens to put out the hockey tree pictured above (see here).

But of course, the best part about the Hockey Tree is the idea, not the execution. Rather than drop 50 bucks on the product, why not build your own?