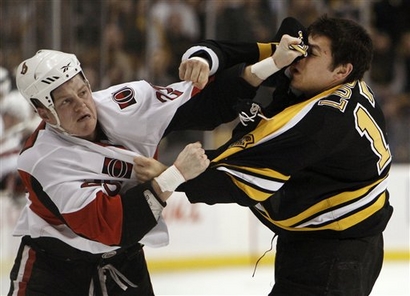 The Ottawa Senators' road woes continued into Boston, as the lost their 18th road game of the season by a 5-3 score to the Boston Bruins. Ottawa's actually 17-12-6 at home (.571 points percentage), but their terrible 10-18-4 road record (.375 points percentage) is what will more than likely (never give up; never surrender) keep Ottawa out of the playoffs this year.

Give the Senators credit for staying in the game when they probably didn't have reason to be in it. Boston went up 3-0 in the first period and 4-1 in the third, but goals from Christoph Schubert and Jason Spezza in the third made it a very close 4-3 game. Phil Kessel put it away with his empty-netter with just under a minute left. Spezza also scored Ottawa's only first-period goal.

Heck of a fight in the first period between Chris Neil and Milan Lucic (embedded below). I've got to give the decision to Neil, although you've got to give Lucic a lot of credit for keeping his balance and taking a few good shots. In his first game back from injury, Neil was on a punishing line with Jarkko Ruutu and Jesse Winchester. On top of a (pretty good) fight, Neil was -1 and was only credited with one hit, a pretty good one on Mark Stuart near the end of the second period. Substituting Shean Donovan's speed and aggressive forecheck for Neil's pugilistic skills really takes a lot of that fourth line's offensive abilities away, so it's something that Cory Clouston should reconsider for next game.

Special teams were a big-time struggle for the Sens tonight. Not only did they go 0-fer on the powerplay, but Aaron Ward scored a short-handed goal for Boston; If you're not going to score goals on the PP, you certainly can't have it be a setback. Boston was 1-for-3 on the powerplay with Chuck Kobasew's goal, so the Sens definitely lost the special-teams battle, and that cost them the game overall.

Ottawa actually outshot Boston 28-22, but Tim Thomas was there when he needed to be, and Dany Heatley couldn't bury two terrific scoring chances he had in the game. Just before Ward's short-handed goal Heatley had a wide-open net to shoot at, but Zdeno Chara blocked the shot with his exceptionally (illegally?) long stick, and that allowed for the Ward's breakaway. At least Heatley had two assists tonight, as did Daniel Alfredsson. Alex Auld stopped 17 of 21 shots--including one sick glove-save on Steve Montador--on the night, but can hardly be faulted for the goals.

Stats pack: Guess who led Ottawa in +/- tonight? Brendan Bell and Schubert, both at +2. And Schubert had a goal on a well-played rush. I guess they're an alright pairing, at times. Coincidentally (or maybe not), the two former New York Islanders, Chris Campoli and Mike Comrie, were both -2, but that's not nearly as bad as Andrew Ference, who was -3 in a game where his team won 5-3. ... Ottawa was badly out-hit tonight, 24-13, although sometimes those stats are a little home-friendly. Twelve players combined for those 13 Ottawa hits, with Ruutu getting two and, even Ryan Shannon and Peter Regin got in on the act with a hit apiece. ... Ottawa's four Chrises--Neil, Campoli, Chris Kelly, and Chris Phillips (Schubert doesn't count)--combined for one shot tonight, off Kelly's stick. That is one more than Brian Elliott had, and he was the backup goaltender. And it's only one more than I had, and I was sitting in my living room eating pizza all game. ... Spezza picked up the slack with five shots, and each of Heatley and Comrie had four. ... With his two goals tonight, Spezza's got 141 on his career (all with Ottawa): That's one behind Shawn McEachern (142) for sixth on Ottawa's all-time goal-scoring list, and he could even catch up to Radek Bonk (152) if he nets another 11 goals this year. ... With his assist, Ryan Shannon has now surpassed Christopher Dahlquist, Brian McGrattan, Rob Murphy, and Jeff Lazaro to take sole possession of 114th on Ottawa's all-time points scoring, with 11 points.