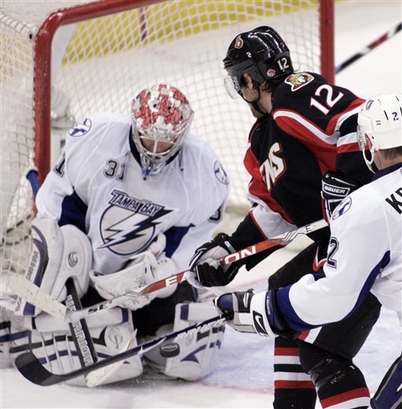 Sorry about the all-caps. I'm just predicting what the game coverage will be in the Ottawa Sun and the Ottawa Citizen tomorrow. I'm betting Carrie Underwood and/or Hilary Duff make the cover of at least the Sun, maybe both.

Wait, there's actual sports news for our sports reporters to talk about? No way! And the Sens actually won an overtime game? Double no way! Chris Kelly's got two goals in three games? Triple no way!

Yes, there was actually something going on on the ice, it wasn't all in the luxury suites. And in a surprisingly intense game, the Senators came out on top over the Tampa Bay Lightning. And Kelly did score, the Sens' second goal, which was short-handed and gave Ottawa a 13-second 2-1 lead. Ryan Shannon scored Ottawa's first goal on the powerplay, and Mike Fisher scored the overtime winner 2:38 into extra time after a Chris Phillips shot. Phillips and Daniel Alfredsson each had two assists, and Brian Elliott stopped 22 of 24 shots.

Jason Spezza also put one in the net, but the refs ruled it was a distinct kicking motion and waved it off. I'm not going to cry over spilled milk, but it was more a distinct tipping motion; his foot was actually moving backwards on order to deflect it towards the net, rather than thrusting forwards in a kicking motion. I'm just sayin'.

Let's talk goalies. Karri Ramo won the battle of the goaltenders, but his team lost the war, so it doesn't matter. Still, he made some good saves to keep the Sens at bay. Elliott was no slouch, though, and made one terrific cross-ice pad-save in the second period to keep the game close. He wants another shot at Adam Hall's goal, which went off Elliott's leg and in the net, but now that the team is actually scoring some goals those weak ones are less heartbreaking.

Two things I'd like to see: First off, forwards finishing their checks on the forecheck. I'm not only talking Spezza and Dany Heatley (although, hey, that'd be swell), but guys like Nick Foligno. Foligno in particular did a few fly-bys on the forecheck instead of making the Bolts' defencemen pay the price, and a guy like him has got to get in there and piss some people off. A great example is Jesse Winchester, who always finishes his checks (just ask Jaroslav Spacek) and had four hits tonight in just 7:11; Foligno had one hit in 15:49.

Secondly, can Anton Volchenkov work on his one-timers, please? Offence isn't his game, and he plays his game exceptionally--three hits and two blocked shots tonight--but on two separate occasions he was set up for a one-timer, whiffed on it, and the Lightning turned it into an offensive scoring chance. But hey, he finished +2, had two shots anyway, and still got an assist--and he's Android--so we can give him a pass, I guess.

The strength of Steven Stamkos is impressive. He's had a tough year, but he did three really impressive things tonight: Went head-to-head with Volchenkov and stayed up while Volchie went down, out-battled Fisher behind the Tampa net (although he probably should have gotten a holding penalty for it), and stole the puck from Spezza to set Martin St. Louis up for a glorious scoring chance with seconds left in the third. Stats line tonight: 20:24, no points, -1, game-high five shots, one hit, one giveaway, two takeaways, 8-for-12 on faceoffs. He may not be the instant success they thought he'd be, but he's getting pretty good.

Oh yeah, and Jarkko Ruutu got eye-gouged. Well, it was more of a biu jee, really, but the bottom line is that Evgeni Artyukhin jabbed his fingers into Ruutu's eyes. And then smooshed his face into the ice, to boot. He got 14 minutes in penalties on the play, and may get further punishment from the league.

Stats pack: There's nothing Alfredsson can't do: He was perfect on faceoffs tonight (okay, 1-for-1). He also had a hit and three freakin' takeaways, with a broken jaw. ... Ottawa only had six shots in the third period tonight, but Tampa only had four. Exciting period. ... Fisher was putting on a show tonight, he had a game-high five hits--some solid ones in there--and, obviously, the game-winner. ... Christoph Schubert was more solid defensively tonight, although his pairing with Brendan Bell is still scary. Schubert had three shots blocked (none on net), three hits (including one big one on Artyukhin) and two shot-blocks. ... Chris Campoli led the team in ice time again tonight with 24:35, inflated with Filip Kuba out of the lineup. He's got his defensive shortcomings, but he's solid enough to carry those minutes, which is promising for next year. ... On top of his four hits, Winchester also had a shot, a shot-block, and was 4-for-6 on faceoffs.