Share All sharing options for: The Record Books: Fastest Goal

The Record Books is a new feature here at Silver Seven Sens. Periodically (read: when we get around to it), we will post a different Senators franchise record and compare it to the league record. Where available, we will include video; where video is unavailable, we will find the most embarrassing hockey card or photo possible. 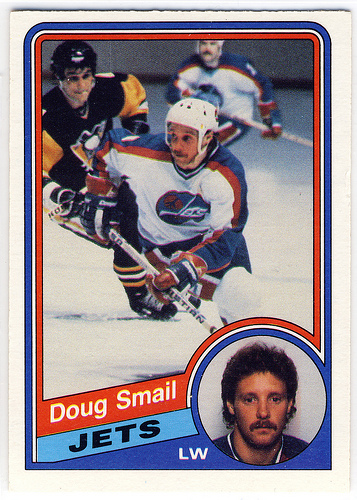 For our first record, it seemed like the most appropriate would be the most recent. Last week against the Oilers, Jason Spezza set the Senators franchise record for fastest goal by scoring just 12 seconds into the game.Though impressive, it pales in comparison to the record put forth by Doug Smail of the Winnipeg Jets. Smail managed to score a goal just five seconds into a game against the St. Louis Blues on Dec. 20, 1981. Doug was in his sophomore season at the time,  just over a decade before he finished his career with the Senators.

Though seven seconds may not seem like a large gap in time, let's remember that we are dealing with records for fastest goal, in which case the seven seconds between the two records is an eternity. If Jason wants to leave his legacy in the fastest goal department, 12 seconds simply doesn't cut it - hell, a mustachioed Doug Smail could score 2.4 goals in that time.