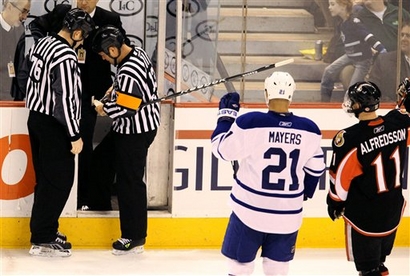 Apparently Leafs Nation is up in arms over Jason Spezza's illegal stick penalty last night (aka Spezzagate), suggesting the Sens' centre's selfishness and insecurity about his natural skills unnecessarily jeopardized the health of fellow players, and--thanks to the heroism of Nobel Peace Prize nominee Ron Wilson--was put behind bars for his egregious error in judgement.

Over on Pension Plan Puppets, PPP is bringing up Bryan Berard's tragic injury as proof that Senators fans and players are completely soulless:

Since they've never lost a player to an eye injury and don't give a shit that one of their player's carelessness with his stick cost a player a promising career it might not have crossed their simplistic minds why that rule might be necessary:

Ignore, for the moment, that the proper enforcement of this rule would never have prevented the Berard injury--which was caused by (admittedly, and inexcusably) gross wrecklessness on the part of Marian Hossa--and please, people! This is the Maple Leafs we're talking about! Spezza made a choice, which--according to a PPP commenter--was "to play with a spear rather than a hockey stick", and his disregard for the safety of his fellow players was obviously malicious in its intent to injure fellow players.

Let's get serious. When Wilson called for the stick audit, his concerns weren't with his team's well-being. Although he suugested that the stick was not only illegal but also dangerous, he similarly suggested that Spezza's stick had been so-fashioned the entire season:

"Our players competed like heck," said Wilson. "I wanted at the end to give our guys a chance to win, they tried so hard. The guy is using a stick that's not only illegal but dangerous. I had an opportunity to call it, so I did."

"Real dangerous, I guess," said an annoyed Spezza sarcastically. "They told me (the blade) was too skinny. I shave them down to be skinnier."

The problem, as officials found, was indeed that the height of Spezza's blade was below regulation as it approached the toe. Wilson said he's been aware all season that the centre was using an illegal stick.

"Unfortunately, our power play stunk so what are you going to do?" said Wilson.

Which, aside from demonstrating Spezza's misguided reaction, also goes to suggest that Wilson didn't actually have concerns about how dangerous Spezza's stick was in actuality, or he would have called him on it in one of the previous four games--or in the 58 minutes prior to when he decided to finally make the call during Monday's game. If he truly believed it was dangerous, then he unnecessarily allowed that risk to be present until it was most tactically expedient to make the call. Which, although less grave of an infraction as actually presenting said health risk, is still a dangerous risk to run in order to get a very minor competitive advantage.

Spezza's stick could have caused an injury, that can't be denied, and shouldn't be excused. All the more reason for the league to look at stick regulations, and give them teeth with stronger penalties if that's deemed prudent. But don't deceive yourself into thinking that Wilson was acting saintly and doing a service for his team's and the league's safety by ensuring he caught Spezza in the act.