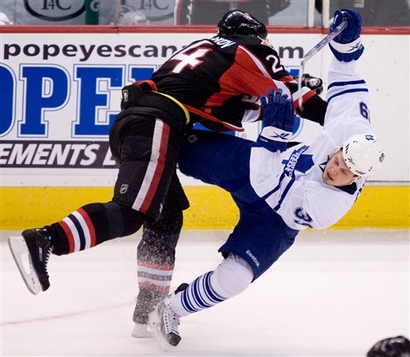 Hey, at least the Sens came back from 2-0 and salvaged a point, right? Right? Okay, fine. At this point in the season, where the Sens are, one point is almost a bad thing. It's alright when the team plays well and wins the game, but I just feel dirty accepting a point for that game.

You know who else should feel pretty bad about registering a point in that game? Jason Spezza. I'm not going to tear him apart too bad, because the CBC guys did a pretty good job of that on their own, but come on... Work a little bit, especially in the Battle of Ontario. He took two penalties, both because he wasn't moving his feet and both because he'd lost position. He put a puck in his own net, which was bad luck, but it was also because he'd been outmuscled and outhustled to the puck. He has enough pure skill to get by in the NHL, and that's why he got one assist on a very nice pass, but what fans and his coaches want to see is for Spezza to consistently get involved in the play even if he doesn't have the puck. And that includes in the defensive end; he's the centreman, and he can't always expect Daniel Alfredsson to do the dirty work deep in the defensive end.

Speaking of Alfredsson, I'm not sure how effective he is on the penalty kill in his current condition--especially when the Sens have the lead and the game is on the line. I never want to admit that Alfie has a weakness, but it would be absurd for him to drop and block a shot. I understand if the Sens are behind and looking to get back into the game, but when they've got a 1-goal lead maybe we should just throw one of Jarkko Ruutu or Shean Donovan on the ice with Mike Fisher for the second PK unit. Give Alfie a rest.

But let's talk about the Sens' comeback. One good shift early in the first period for Ottawa, really, courtesy of the fourth line. Then Toronto dominated the rest of the period, and took a 2-0 lead. Just 28 seconds into the second, Ryan Shannon scored with a wrister from the slot thanks to the set-up by Spezza, and the Jarkko Ruutu scored a grinder's goal during a goal-mouth scramble. Alfie blasted a slapshot past Curtis Joseph early in the third, giving Ottawa a 3-2 lead, but the Sens couldn't hold and Pavel Kubina scored off a point-shot with Spezza in the box. Kubina also scored the overtime winner, which was probably a goal Brian Elliott would have liked to have back.

Overall, Elliott was alright. Although some of the goals weren't pretty, he did make some big saves--particularly on a Jason Blake breakaway when the Sens were trying to mount their comeback. It won't be one of his greatest memories, and he did let in four goals, but as I said, he wasn't the biggest problem for Ottawa.

Two Senators were particularly effective in my opinion tonight: Anton Volchenkov and Jesse Winchester. Volchenkov was a monster, and had seven hits--two of which were big hits--plus six blocked shots on the night. Winchester was at the top of his game, particularly because he was playing his along-the-boards, puck-possession style of game, and led the Senators with six shots on goal.

Alex Picard left the game after playing only 4:36 due to a lower-body injury. Didn't see the play, but the Sens had to play with five defencemen the rest of the game.

Stats pack: Antoine Vermette was an incredible 100% in the faceoff circle, 14-for-14. ... Even with the faceoff domination, though, how does a player like Vermette not register a single shot despite 12:59 in even-strength ice time, and 16:24 overall? According to the stats, he didn't even direct the puck at the net once; no shots, no shots blocked, and no shots going wide. Not going to score many goals that way. ... Jason Smith was, maybe surprisingly, a +2 on the night. ... It was fun while it lasted, but Chris Campoli's first point-less game as a Senators was his fourth game with the team overall. ... Other than Picard, who left early with that injury, Mike Comrie had less ice time than any other player with 9:51, despite registering an assist on Ruutu's goal. ... Ottawa doubled up on the Leafs in hits 32-16 (although that may have been a friendly statistician), but Toronto outshot the Sens 38-32.