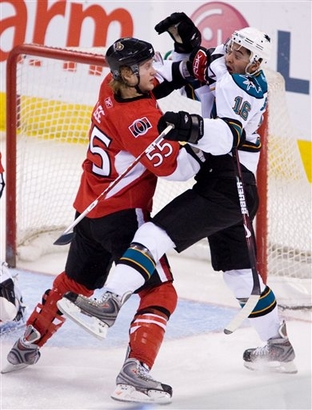 According to the Ottawa Sun, goaltender Martin Gerber cleared re-entry waivers--meaning no one was even willing to pay him $425k (half his remaining salary) for the rest of the year, as an insurance policy--and will likely finish the year in Binghamton.

It looked like we were finally going to be able to close the Gerber Chapter in Senators history, but I guess we'll still have to wait until the end of the season for that. It also would have meant a new start for a good person who's been a bad goalie. Closing this chapter can come quickly enough.

In other roster news, Ottawa had to clear a roster spot--at least temporarily--for the Gerber recall, and so defenceman Brian Lee is expected to be sent to the AHL. Lee had a forgettable game last night, certainly, but had been playing very well of late. It is unclear if the demotion of Lee would be for the remainder of the season, or if it is preparation for an impending trade. Time will tell.