In another frustratingly effete effort, the Ottawa Senators made Jaroslav Halak look like an all-star and made their powerplay look like the feeblest in the league, walking out of the rink with a very disappointing 4-1 loss against the Montreal Canadiens. After the loss, Montreal pulled even with Ottawa in the standings, a very tough-to-swallow fact despite the fact that the Sens still have two games on hand. Most disappointing was the Senators impotent powerplay, which went 0-for-7 on the night despite 13 shots--which hearkens back to the criticisms of Bryan Murray earlier this week, when he said the Senators lack the grit to drive to the front of the net, force rebounds, and score some dirty goals.

Although there have been calls for Mike 'Not Martin' Brodeur to see some action one of these days, little blame can be placed at the feet of Brian Elliott for the loss. The first goal came after a linesman accidentally (or was it?) kicked the puck around Chris Phillips and right to Tomas Plekanec, leading to a two-on-one that Anton Volchenkov misplayed; Elliott was square to the shooter (Plekanec), while Volchenkov left Mike Cammalleri wide open to tap in the cross-ice pass. And the second was a doubly-tipped powerplay goal (which, apparently, are possible).

On to some finer points of the game...

Sens heroes: Mike Fisher-Milan Michalek-Daniel Alfredsson
The Senators' top line was dominant for much of the game. Fisher had the lone Senators goal early in the second period, and also had four hits and seven shots--second only to Alfredsson on the night, as the captain fired eight at Golden Jaro. Michalek had three shots, meaning that the three had 18 of Ottawa's 46 shots on the night. They also combined for four takeaways. Long story short, they brought it.

Sens zeroes: Alex KovalevKovy did one good thing tonight: He injured Jaroslav Spacek with a shot late in the first period (Ed.: I'm joking, Kovalev didn't do anything good Tuesday night. And I hope Spacek is back in the lineup for next game, he's a well-respected person and a solid player). After that, he did little else: He floated either just inside the offensive or defensive ends, rarely venturing deep enough to contribute to the play, and didn't meaningfully contribute to the game in any way. Which you may say is characteristic of Kovalev, but most expected he'd at least bring some intensity to the team that let him walk for nothing. More unfortunate was that, since it was a one-goal game for most of the night, Kovalev could have made even just one play that would have had the chance to completely turn the tables, and he had plenty of powerplays to do it on. But he just didn't.

Sens killers: Jaroslav Halak, Sens' powerplay
Whether or not Halak was actually great isn't the point; he looked great. Look at the chart below (from CBSSports.com), which shows you where Ottawa had most of their shots from, and you'll notice one thing in particular: Little to no shots from the slot. The bulk of the shots are low-percentage ones from awkward angles at either side of the net. That has as much to do with the Senators' unwillingness or inability to get to that part of the ice and not have their shots blocked as it does the Canadiens' ability to clog up the area. 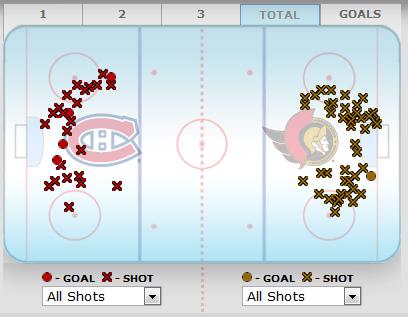 As for the Senators powerplay, it was just not pretty. I was actually surprised to see Ottawa had 13 shots on the powerplay, but they seemed unable to really get much going on it--unfortunate, because the PP had been clicking for quite a while leading up to this game. Ottawa was unable to get the puck off the perimeter and into the centre of the ice, where key scoring opportunities are truly generated. We complain about not getting powerplays some games, but when you can't score on them anyway, it's basically a moot point.

Credit goes to: Erik Karlsson, Chris Campoli
You've really got to handle it to Campoli after his scratching: He's taken it as a constructive criticism rather than a personal insult, and his play has improved as a result. And he's earned the trust of Cory Clouston, given 21:24 in ice time--the second-most on Ottawa after only Filip Kuba. You might think the PP opportunities had a lot to do with that, but more than 15 of those minutes were at even strength. He was -1 tonight, but he had a shot on net, three more fired toward the net, and looked like the player Murray was expecting when he traded a first-round draft pick for him last season.

Similarly, since being recalled from Binghamton, Karlsson has really looked strong. He had some strong poise in the first period, particularly of note being a confident play to use his glove to settle the puck and another to use his body to protect it--all in the defensive end. His confidence to play very high in the offensive zone can be nerve-wracking at times, but it hasn't yet cost him big time. But defensive play isn't what Ottawa needs from him, and that's not all he provided tonight: He had five shots on net, third best on the team, and played 21:12 on the night--fourth-highest on the team.

Big Hitter: Jesse Winchester
With Chris Neil and Shean Donovan out of the lineup, the supporting cast needs to step up and fill the void in the grit department. Although few seem willing to muck it up in front of the net, Winchester is stepping up his physical game. He had a team-high five hits in only 11:32 tonight, including a very impressive hit on Max Pacioretty behind the Canadiens' net. His line with Peter Regin and Chris Kelly was pretty strong in the first period, but didn't get a shot to generate momentum or dirty goals in the third--something Clouston might need to address, because I've noticed he's falling to the John Paddock-esque failing of consistently looking to the stars to provide all the offence, while making the players who are "on" to ride the pine.

Counterpoint: We can't blame the refs
The Senators had seven damn powerplays.

Endnote: It was definitely the kind of game the Senators need to shrug off, and they need to do so quickly; as bad as thePhiladelphia Flyers have been for the last couple months, they're still a good team. Ottawa can't play them lightly when they meet up on Thursday.