Share All sharing options for: Senators overcome Kerry Fraser and Canadiens in 4-2 victory

I’ll just come out and say it.  Ottawa was absolutely robbed on one of the worst calls I’ve seen this year.  Mike Fisher clearly scored and the goal was waved off because Chris Neil was "too much in the crease" or something.  Here’s an important part, though:  Montreal was robbed by some officiating as well, as the Senators were called for no penalties tonight, and I can tell you that Ottawa did not play a penalty-free game.  The Canadiens were buzzing in the second period and a power play almost certainly would have scored and tipped the game in their favor.

Quite an impressive win for this undermanned team, as they rallied back from a two-goal deficit and took two crucial points from a division rival. The win moves the Senators to within one point of Boston for fifth place in the East and within six points of Buffalo for the Northeast Division lead.  Let’s look at some heroes and zeroes!

Sens Hero #1: Pascal Leclaire
A real live NHL goaltending game here.  Leclaire was great.  GREAT.  He got some assists from luck (and Anton Volchenkov, as always) tonight, but he racked up great saves like they were going out of style.  His play tonight kept the team in the game until they could find a way to score the game-winning goal.  I can’t remember the last time I genuinely felt this team’s goaltending gave them a chance to win every game, but Leclaire’s play tonight restored that feeling, and watching the team’s play in front of him, you got the sense that they felt the same way.

Sens Hero #2: Peter Regin
A goal and an assist tonight.  12 out of 22 on faceoffs again.  Strong two-way game.  Regin is finding the game that forced Murray to keep him on the team coming out of the preseason.  Hamlet has three points in his last three games.  Keep it up, kid.

Sens Hero #3: Alex Kovalev
Yep, I said it.  I have not been Kovalev’s biggest fan since he came here, but with Spezza and Alfredsson out, Kovalev has stepped up his game and he generated a lot of chances tonight – enough worth mentioning.

Sens Hero #4: Anton Volchenkov
Speaking of play worth mentioning, Volchenkov had a Volchenkov kind of night.  You won’t see it on the scoresheet – he was a minus one in 18:43 of ice time – but everything he did out there helped the team win.

Sens Hero #5: Chris Neil
Neil earned the game winner through outright effort and it was fitting since he was the victim of the call that robbed Mike Fisher.  Neil’s play since he has returned from injury has been downright vicious at times, all while remaining within the rules of the game.  It’s hard to justify his salary sometimes, but when he plays like he did tonight, you can see that the intangibles he brings make his teammates’ lives easier.

Just Missed:  Ryan Shannon, Mike Fisher
Shannon now has two goals in two games.  Now, I don’t want to sound biased, but Mike Fisher is pretty much the best player in the history of hockey.  Fisher should have had a goal and an assist tonight, and was a crushing 15 of 20 on faceoffs.  Why he is not wearing the ‘C’ with Alfredsson and Spezza out, I don’t understand.

Sens Zero: Filip Kuba
Kuba didn’t suck tonight.  As bad as he has been recently, not sucking is a massive improvement.  It’s also totally unacceptable for the amount of money he is being paid.  His role is different than Chris Phillips and Volchenkov, but they manage to be consistent.  Why can’t Kuba?

Who is this Karlsson you speak of?
Erik Karlsson was scratched for the second straight game.  Ottawa is clearly grooming him for a future role with the team, when future GM Daniel Alfredsson retires.  Why else would he be in the press box instead of playing somewhere?  I tried calling Karlsson for thoughts on his development so far, but Brian Lee answered the phone.  Weird.

Here is a shot chart.  I command you to look at it: 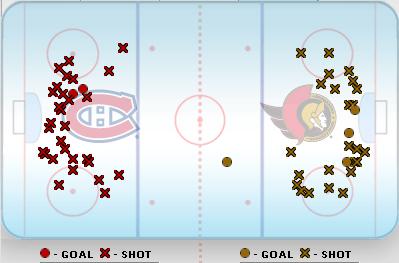 Up next, the Senators face the upstart Colorado Avalanche.  Colorado’s Craig Anderson is the new Tim Thomas, so let’s hope he doesn’t look like another Sens Killer on Wednesday.