Share All sharing options for: Senators start strong against Sabres, win 3-2 in shootout

The Ottawa Senators deserve plenty of credit for their 3-2 shootout victory over the Buffalo Sabres on Saturday night: It was a Boxing Day classic, which is often an excuse in itself, but the Sens were further hindered by the absence of three of their top six forwards (Jason Spezza, Daniel Alfredsson, and Nick Foligno). Oh yeah, and the team missed out on their morning skate in Buffalo this morning as their flight was delayed a few hours. Because of that, it probably surprised everyone, then (especially the Buffalo Sabres), that the Senators came out like gangbusters in the first period, firing 18 shots at Sabres 'tender Ryan Miller before the Sabres even got their first on Pascal Leclaire. The Senators went up 2-0 in the second before their steam ran out, but still managed to hold on through the third period and overtime until an impressive (and, again, surprising) shootout victory against Miller.

Sens heroes: Ryan Shannon, Alex Kovalev, Chris Neil
Shannon, in all likelihood, had his best game so far this season. His goal was a little lucky, but that was what it was going to take to beat Miller the way he was playing. On a line with Mike Fisher and Alex Kovalev, Shannon looked like the speedy effective player we saw for much of last season, getting four shots on the night and buzzing around for plenty of it.

And not a minute to soon, Kovalev looks like he's finding his stride in an Ottawa uniform. He must have been a little disappointed about being left off the Russian Olympic team (although he apparently expected the move), Kovalev brought a strong game tonight, getting one assist, taking four shots, and looking pretty strong through most of the night. His puck possession was as strong as ever, he had the decisive shootout marker with a nice deke to his backhand.

Finally, Neil was fairly effective in his role, and he seems to be at his pestiest against the Sabres. He took two penalties--one stupid, one coincidental--which the team could have done without, but he had a goal that made up for them, and put a few Sabres off their game.

Sens killers: Ryan Miller
After outshooting Buffalo 19-1 in the first but not scoring a goal, the Senators must have thought Miller was going to steal this one for the Sabres. There were plenty of scoring chances on those 19 shots, including one from each of Jarkko Ruutu and Jonathan Cheechoo, but Miller was there to be counted on each one. Luckily, Ottawa kept pushing, and both Shannon and Neil got the puck past Miller. Still, the Sabres had little business earning even one point in this game, and Miller deserves a lot of thanks from his teammates for it.

Sens zeros: Filip Kuba, Sens powerplay
It might be a little harsh to qualify Kuba as a Sens zero, but he was invisible tonight, and has been for a few games--he's as culpable for what got Erik Karlsson scratched tonight as Karlsson himself is. The Senators had 40 shots tonight, Kuba had none of them (the only Senator without a single shot on net), even though he played 23:04 TOI overall and 3:13 in powerplay time. The Senators' powerplay was awful again tonight, and Kuba's ineffectiveness is a large reason for that. Across Kuba's stat line, he was +1, had no points, no shots even directed at the net, no blocked shots, no hits, no takeaways, and one giveaway. If Ottawa's going to win more than they lose while Spezza and Alfredsson are out, it will be on the strength of their all-around defensive responsibility, and the highest-paid defenceman on the team has to be a significant part of that play--and he has to provide offensive support, too, especially with the man advantage.

With nine powerplay shots, you could probably make a pretty good argument that the Senators powerplay wasn't bad. But the bottom line is that once again tonight, it didn't give Ottawa the offensive boost that it needs to provide. Ottawa doesn't have a PPG in six games, is 0-for-21 over that span, and stand at 28th in the league in powerplay efficiency.

Sitting idle: Erik Karlsson
Must have been pretty frustrating for Karlsson to sit in the press box for tonight's game, especially since a few of his countrymates were shellacking the Czech Republic in the World Junior Championships earlier today--a tournament which, if he weren't benched while on the NHL roster, he'd have plenty of success in. Personally, I'm not sure what the intent was behind scratching Karlsson, but hopefully he'll be back with plenty of motivation when he's in the lineup again.

Best of both worlds: Chris Phillips and Anton Volchenkov
Always reliable defensively, Phillips and Volchenkov were solid in their own zone tonight, but appear to be stepping it up all-around with the Senators' lineup as depleted as it is. Each had one assist, and pinched in to keep offensive pressure on at different times through the night. No matter how the rest of the team responds to the challenges, it's good to know the Sens' top defence pairing just keeps on going. 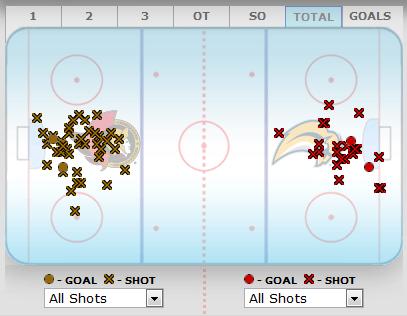