One to forget: Penguins destroy Senators 8-2

Share All sharing options for: One to forget: Penguins destroy Senators 8-2

After two periods, the shots were 39 to 24 in favor of the Ottawa. The chances were grossly lopsided in Ottawa’s favor.  And the score was six to one for Pittsburgh.  There were signs it was going to be an ugly night early with Alex Kovalev missing a gaping open net, Marc-Andre Fleury making save after save, and captain Daniel Alfredsson leaving with a left shoulder injury.

The Senators came out angry in this game, hitting, shooting, and battling.  Chris Neil, in particular, brought a physical game as he was looking for – and finding -- someone to hit on every shift.  Shean Donovan  also immediately brought his energy back to the fourth line as they generated some quality scoring chances early in the game.

Unfortunately, things quickly unraveled in the second period, as the Penguins could suddenly do no wrong.  They repeatedly put together beautiful passing plays that embarrassed the Senators defenders.  Let’s take a closer, but short, look at the carnage before trying to move on.

Sens Hero: That’s right, there was just one tonight… Peter Regin.
Five shots, all scoring chances.  12 for 22 on faceoffs, including the win that led to Anton Volchenkov’s goal.  Superb backchecking.  It was far and away Regin’s best night in a Sens jersey, and it’s a shame that it was wasted.

Sens Zeroes:  Everyone else, with the exception of Alfie.
Hard to blame the team for giving up in this one -- especially when it could have easily been 3-1 after the first period – but six goals will suck the wind out of anyone’s sails.   The effort was there early, but the goals were not.

Sens Killers:  Fleury, Evgeni Malkin, Bill Guerin, Sidney Crosby.
With the way these four played, the Penguins could have put children in their lineup and won.  Pittsburgh’s entire third period strategy was to feed the puck to Guerin to try and get him a hat trick.  No, I’m not joking.

Man up: Jordan Staal wore a full face shield for a few stitches on his nose.  Just sayin’.

Thanks a lot, Murray:  Bryan Murray’s call to the NHL’s director of officiating, Terry Gregson, seemed to pay off, as the team had six power plays tonight.  They promptly converted none of them.

Conversely... Pittsburgh had eight power plays, and they eviscerated Ottawa for three goals on them.  The Penguins came into the game dead last in the league at 15% on the power play.

Welcome back: Pascal Leclaire looked a little tired tonight but had no chance on any of the goals he let in.  He should have said his jaw was still sore and skipped this one.  Brian Elliot was just as helpless on his two goals.

Joke of the night:  Pittsburgh's announcers arrogantly speculated if Chris Kunitz's four-point second period was a record.  It's not, as Bryan Trottier holds the record with six.

Here is a shot chart for the masochists: 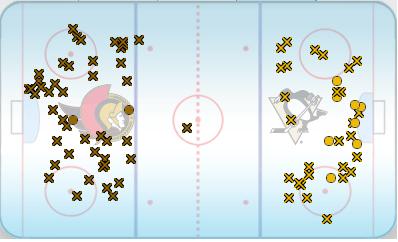 The team does not play again until Saturday, when they visit the division-leading Sabres in what will be a crucial game.  Let’s hope they use the break to clear their heads of tonight’s debacle and bring the same energy as they had in the first period of tonight’s game.