Share All sharing options for: How Erik Karlsson scored his first NHL goal

It may have taken a little longer than he would have liked, or than many had expected, but Erik Karlsson scored his first NHL goal Saturday in the Ottawa Senators' 4-1 victory over the Minnesota Wild. How it happened will likely be forgotten if his career plays out as Senators fans and brass expect him to, but why not take a closer look at the play as it developed while it's still fresh in our minds.

It started off with a wrister from Karlsson. Bit of a weak-looking shot, with Karlsson sliding across the blue line, but he did what was most important: He hit the net. 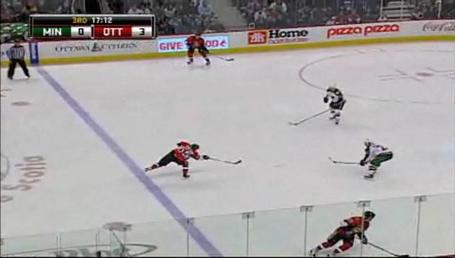 After Niklas Backstrom made the save, Joshua Hennessy and Peter Regin worked the front of the net. Minnesota defender Clayton Stoner appeared to hold a conversation with Backstrom, and Marek Zidlicky was bodied off the puck by Regin, who won the puck battle and drew the puck back to Alex Kovalev on the side boards. 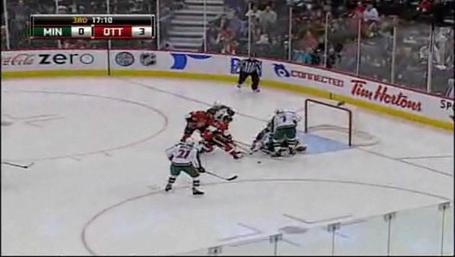 With Kovalev on the sideboards, he draws left winger Cal Clutterbuck towards himself--and away from Karlsson's shooting lane--while settling down the puck. Once he's got it settled, he looks to Karlsson, and sets the rookie up with a perfect one-timer pass: A steady puck with a good pace, at just the right spot in front of Karlsson. 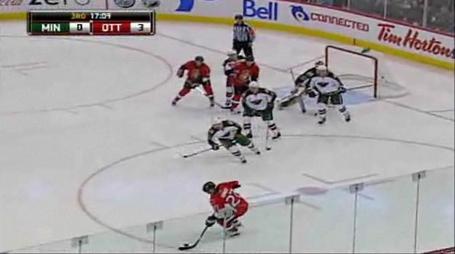 Cue the one-timer. We've heard a lot about Karlsson's slapshot, but haven't had much of an opportunity to really see him let one rip so far this season. This time, he made no mistake, and his timing--with a little help from a perfectly-placed pass from Kovalev, and some wingers drawn out of position (or just hesitant to block the shot), the puck got through. 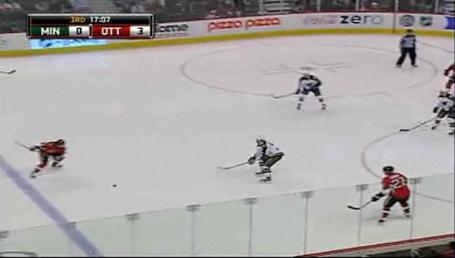 Again in front of the net are Hennessy and Regin. Only Regin got a point on the goal, but both of them deserve some credit for winning that battle for the puck and for causing trouble in front of the net. For this second shot, Regin was right at the top of the crease, while Hennessy worked Zidlicky a little higher off the crease. 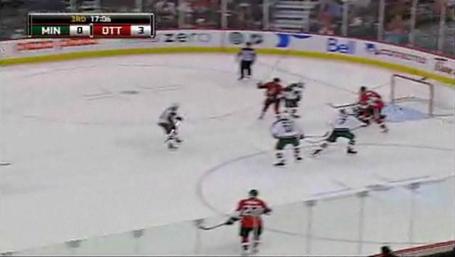 And a celebration ensues. It really looked like Kovalev wanted to get Karlsson that goal--in fact, it had kind of looked like the team had been working to get him his first for a few games now. 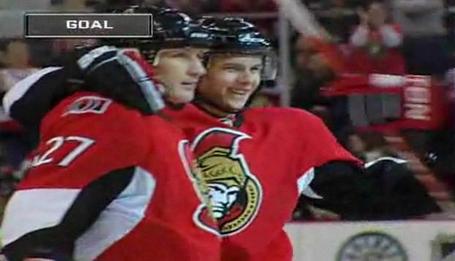 Might not be an amazing goal (wouldn't it have been spectacular if he'd scored on that breakaway a couple of games ago), but a first goal is a first goal. The fact that it was the fourth goal in a 4-1 victory won't likely matter much to him a few seasons from now.