The Ottawa Senators stepped up their game tonight for goalie Mike "Not Martin" Brodeur, who made his NHL debut.  Brodeur only let in one goal on 23 shots, but that didn’t matter as the team put up four goals to support him.  Ottawa was strong in almost all facets of the game (except for one… you can guess now and see if you’re right later) and made what looked like a concerted effort to help out their young goaltender.  Brodeur was not spectacular, but he did not need to be – defensemen were quick to jump on and clear rebounds, clear traffic in front of the net, and the team as a whole worked to keep shots to the outside.

I’m giving out praise like Halloween candy tonight, so let’s get right to it.

Sens Hero #1:  Erik Karlsson.
Karlsson recorded his first NHL goal tonight, and it was well deserved.  A player whose game has improved every night since his recall, it seems he is rewarding GM Bryan Murray’s faith in him.  Karlsson weighs as much as my cat, but he already possesses a big time shot, and Alex Kovalev had the smarts to feed him.  His first blast rebounded to Kovalev, who simply decided to pass to him again.  His second shot did not miss.  It is exciting to see Karlsson’s offensive vision develop.  He is making smart plays more and more often, though he is far from perfect.  If he can fill out his frame, his potential is very exciting to think about.

Sens Hero #2: Mike Brodeur.
Guy won his NHL debut and only let in one goal, come on.  This alone is enough for hero status, but when the Wild started to buzz late in the third, he put together several great saves.  The team then rallied behind him and used the momentum to generate a long stretch in Minnesota’s zone, effectively canceling all of the Wild’s hard work.

Sens Hero #3: Peter Regin.
Hamlet, like Karlsson, is riding a string of strong games lately.  Regin put together a two-assist game tonight.  He is probably not going to be a dominant goal scorer, but he is strong defensively and has some pretty decent offensive skills.  If he can continue contributing at this level, he will be a player on the team for quite a while.

Sens Zeroes:
I have none tonight.  How awesome is that?

One of these things is not like the other:
Mike Fisher and Jonathan Cheechoo both scored their 300th point tonight.  Way to go, guys!

Oh, hello there:
Milan Michalek scored the game-winning goal tonight, snapping a nine-game goalless drought.  It was a snap shot, changing up from his previous pattern of goals from in front of the net.  It’s nice to see a reminder that he can score from many different places on the ice.  The goal was also his team-leading 16th.

Anyone else notice?
Ottawa has done a really good job of limiting team’s shots recently.  Teams that are averaging 30 shots a game are playing the Senators and only coming away with 22 or 23.

Sens Killers: Ottawa’s Power Play.
Another 0-for effort tonight, as the Senators went 0-for-6 on with the man advantage.  Don’t worry, guys, it’s not like special teams matter in the playoffs or anything.  Is Clouston even working on this with the team?

Jealous of Picard?
Anton Volchenkov opened the scoring tonight with an awesome shot.  Anytime the Android scores, it’s fun to see, and he ripped a shot for a goal tonight.  But that wasn’t good enough for him, as he took another shot that was also a good scoring opportunity.  In addition, Volchenkov and Chris Phillips were +3 tonight, supporting three different goal-scoring lines tonight.

Shot Chart from the game: 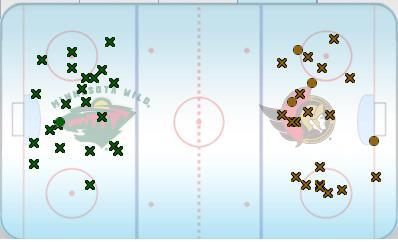