Senators shut down Sabres in 2-0 victory

Share All sharing options for: Senators shut down Sabres in 2-0 victory

The Ottawa Senators' 2-0 victory over the Buffalo Sabres may look like it was a boring game if you're just peering at the scoresheet, but anyone watching the game would certainly disagree with that. There were big hits--and controversial ones--and plenty of scoring chances, with the vast majority of them stymied by either Brian Elliott or Ryan Miller, probably the first and second stars, respectively, for most people who watched the game. It was certainly one of Ottawa's most impressive start-to-finish efforts of the season, and it paid off on the scoresheet--all it took was a significant injury to the team's top centre for the Senators to find their rallying cry.

Sens heroes: Brian Elliott, Peter Regin
Elliott the pendulum was back on the favourable side tonight, and was outstanding for the most part. His glove was right on, his rebound control was strong, his reaction time was light-speed, and his luck was there when those assets failed him. He may have only faced 22 shots, but he stopped them all, and you can't ask for much more from your goaltender.

I'm going to give Regin some love here, too, in part because I've been hard on him recently, and also in part because he looked like the force he'd been earlier in the season. He had one assist on the night, and could very well have had two goals against most other goalies in the league. He finished with a game-high five shots (tied with Tim Connolly) in 13:21 TOI, and it`s a pretty good bet he'll play a few more games as a winger rather than a centremen in the near future.

Sens killers: Ryan Miller
People have been saying Miller's been the best goaltender in the league so far, and I didn't realize just how good he was playing until I saw him tonight. He may have only made 26 saves on 28 shots, but there were plenty of good chances in Ottawa--especially early in the game, and Miller gave the Sabres every chance to take the lead and win the game.

Sens zeros: Jarkko Ruutu
I'll let Mark take care of this one, because he obviously feels strongly about it.

Mark's take:  Ruutu has to play smarter.  There's no other way to say it.  On his own, he accounted for nine of Ottawa's thirteen penalty minutes on the night.  Think about that.  Almost seventy percent of Ottawa's penalty kill  time tonight was Ruutu's fault.  One a night where the team was so depleted that a defenseman was playing as a forward, that kind of sloppy play is flat out unacceptable.  We have repeatedly seen this team outwork more skilled opponents and then give away hard-earned leads with untimely, sloppy penalties.  Thanks to Ruutu, Buffalo had a great opportunity to continue that trend tonight.  That they weren't able to (with a big assist from Connolly in the middle of Ruutu's major) is a testament to the effort of his teammates.  He should be made juice boy for the month with the way he forced everyone else to bail him out.

Ruutu can be a good player, and I realize his game is playing on the edge, but he has to play intelligently, and that means being aware of his reputation.  Just like we've seen Carkner reign in the fists as he becomes more integral to the team, Ruutu must also be aware of when to push the envelope and when not to -- and a one-goal game against the division leaders is not the time to.

The bottom line: This depleted roster cannot afford to take stupid penalties at any point.  Ruutu took three tonight.  I hope Cory Clouston tells him to shape up.

Plenty of credit to: Chris Campoli, Jesse Winchester
I'm not sure whether or not Campoli was excited at the prospect of playing as a forward, or just at the prospect of playing at all, but he sure made the best of his chance. He finished with 7:26 in ice time, more than many expected, and he looked like he was excited at the chance to punish opposing defenders as unforgivingly as he's often been punished when backchecking himself; he was tied for the team-lead with three hits on the night. No shots credited, but he created an amazing scoring chance for Ryan Shannon in the second.

As for Winchester, it was a strong statement that--although he's no replacement for Jason Spezza--he's not going to look too out of place in an increased role, especially if he's with any of Daniel Alfredsson, Mike Fisher, or Milan Michalek. His faceoff dominance continued tonight (he won 11 of 17 faceoffs), so now we know it wasn't just because he was against weaker opponents--a lot of his wins tonight came against Derek Roy. Winch won third star from NHL.com, despite registering no points and no shots in his 18:55 TOI; that ought to say something about how effective he was at what he was asked to do.

Not a bad start: Josh Hennessy
Hennessy only had 6:47 TOI, but he was strong--especially in the first period, in between Campoli and Shannon. I'm actually a little surprised Cory Clouston didn't give Hennessy and Shannon more of a chance to get something going, considering how strong they were for him in Binghamton, but the guy's got his game plan, and he's sticking to it. In his limited ice time, Hennessy had a shot on net and two hits.

First big hit: Erik Karlsson
Karlsson took what, if memory serves, was his first big NHL hit when he was plastered by Tim Kennedy in the first period. It looked like he was labouring at first, but Special K bounced back and finished off with a pretty solid game. Not as impressive, in my opinion, as the last two games, but he's really appearing to be more confident now--especially in asserting himself in front of the net.

Unnoticed greatness: Ottawa's defensive support
I'll once again refer to the CBSSports.com shot chart to demonstrate a pretty telling trend for the Ottawa Senators; this time, look at where the Sabres took most of their shots from on the night: 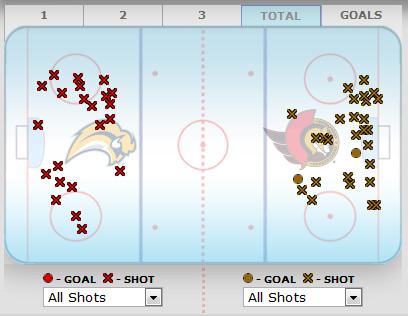 Compare Buffalo's shots to Ottawa's, and you'll notice the defensive support Ottawa offered Elliott, and the lack of defensive support the Sabres offered Miller. There's but one shot within the Senators crease, and five or six in the immediate area of Buffalo's. It's especially impressive on the left side of the Senators' end, covered mostly by Matt Carkner, Filip Kuba, and Chris Phillips--Ottawa's strongest positional defencemen on most nights.