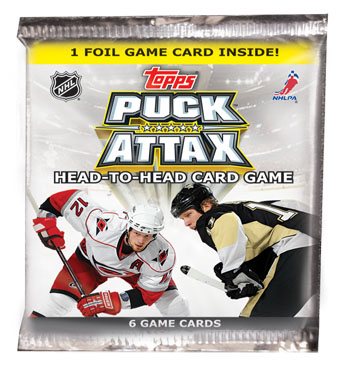 A few weeks ago, I was contacted by someone The Topps Company, Inc., whom you may remember from the trading cards of your youth. They offered me some samples of their new head-to-head gaming card product, Puck Attax, if I'd just talk about it on the blog, so here goes.

Puck Attax is sort of like Magic Cards, but with hockey players--and therefore slightly less nerdy. You've got a bunch of NHL player cards, each with their own 'offensive' and 'defensive' potency rankings. You pick some cards, set them up on the playing surface, and start attacking your opponent. Pick a player (forward, d-man, or goalie), tell your opponent whether you're attacking or defending a player from their team, and have at it. Whoever wins gets next go-sies. And so on it goes, until all the cards are gone; if it's a tie, traditionalists would stop, but the current rules stipulate a shootout with a pre-selected shootout artist. And it goes on, until you get bored or Coronation Street comes on and you stop to watch it.

My overall impression: Although I'm pretty immature a lot of the time, I am still technically an adult; I can't see myself playing this game for a very long time. That said, I could see kids loving it, especially the young hockey fan. I remember how crazy I was about P.O.G. when I was young, with all the associated hardware (P.O.G. discs, slammers, the illegal metal slammers you'd play with sometimes, even a playing arena), and I can see this game becoming as viral as P.O.G. was with a little more Saturday-morning-cartoon marketing. Puck Attax is even better than P.O.G. in that it combines a kind-of-weird card game with collectible, tradeable cards featuring the NHL players kids like. I was pretty exciting breaking packs open, to be honest. Will I be paying for any more packs than those which I've already received, though? I doubt it, and that's probably the truest statement about how stoked I am about the game you can find.

After the jump, I've outlined some good, some bad, and some just plain weird things I noticed about the game. Don't take my word for it, though; try it out for yourself. Topps also offered a couple of commenters their own opportunity to get some free Puck Attax, so just do a bit of online research and answer me this: Who are the six Ottawa Senators players featured in the Puck Attax game? The first two commenters with the correct response will get some free cards from Topps.

Now, onto some finer things I've liked and not liked about the game...

The bad:
The weird