Share All sharing options for: Senators bring down Flyers 2-0 as Foligno finally arrives

Some people might say that the Ottawa Senators 2-0 victory over the Philadelphia Flyers was a boring, painful game to watch, but I enjoy a good defensive battle every once in a while--especially when teams are still exchanging scoring chances, just not scoring them. The teams went back and forth most of the game, seemingly alternating in shots, scoring chances, and penalties, but not scoring until Nick Foligno drove hard on Flyers goaltender Brian Boucher and potted his own rebound. Jesse Winchester scored an empty-net goal to cap off the scoring, as Brian Elliott earned his first shutout of the season.

Sens heroes: Brian Elliott, Nick Foligno, PK unit
You've got to hand it to Elliott, he had a strong game tonight--as opposed to some of his recent outings. He stopped all 23 he faced, came up big on Philly's six powerplays, and stopped a big breakaway in the second period. Philly had more scoring chances than Ottawa on the night, but Elliott was there to stop them all.

Foligno, meanwhile, may have had his best game of the season. The game-winning goal goes a long way--especially when it's on a solo effort as it was tonight, where Foligno took a shot, drove to the net, and put his own rebound in the net--but he also had a game-high six shots on net, and was on. Aside from his goal, he also made Chris Pronger look silly in the second, getting around him and just about opening the scoring at that point. It was the kind of game Foligno has been and will be counted on to provide, and maybe the historically streaky scorer will get himself going with tonight's effort.

Finally, the PK unit was very strong, putting the boot to all seven Flyers powerplays. Chris Phillips (7:17) and Anton Volchenkov (6:58), as expected, led the way in short-handed TOI, but forwards Daniel Alfredsson (4:55), Chris Kelly (4:57), and Jesse Winchester (4:13) pulled their own weight, too. Volchenkov had blocked three shots on the PK, and Phillips blocked two. Winchester's empty-net goal was technically short-handed (a 6-on-4, as a matter of fact), a result of a a good defensive play and a solid read.

Sens zeroes: Peter Regin
Seriously, where'd this guy go? You could give him a break because he's a rookie, but he played 11 games last season and started this season well--he was outstanding in the pre-season. These days, though, he's regularly the least-utilized player (5:17 TOI tonight, including only 45 seconds in the third), and for good reason; he's not doing anything. At this rate, he's the first candidate for a benching when Chris Neil returns.

Sens killers: Ottawa powerplay
The powerplay was just awful again tonight. Last game, against the Canadiens, you could say it was a result of playing against a hot goaltender, but against the Flyers the Senators were 0-for-6 and had only two shots on the powerplay. Two shots, in 10:11 of time with the man advantage. Ottawa's now goalless in their last 13 powerplay opportunities, over three games.

By the numbers: Ottawa missed 4 shots and had 17 blocked; Philadelphia missed 14 and had 25 blocked
Although Ottawa outshot Philly 25-23 on the night, when you factor in missed or blocked shots, Philadelphia put the puck to the net 62 times, while Ottawa only did so 46 times. You can take it one of two ways: Ottawa didn't put the puck towards the net often enough, or that Philadelphia couldn't hit the net effectively enough.

Shooting from the hip: Sens' shot map
You may remember my illustration of Ottawa's unwillingness to get into the slot and shoot from last game against the Canadiens; tonight, different story. Below is the shot map from Thursday's game, again from CBSSports.com: 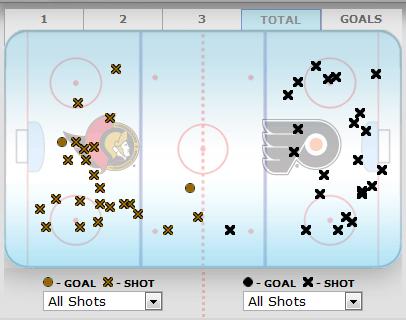 You can see a distinct difference from last game, and that's based on where Ottawa's shots were taken from on the ice. There are still plenty of shots taken from the side (especially the left side, for some reason), but there are a bunch of shots taken from the slot, too. The leader in shots from right in front of the net? None other than Foligno, who took just about all of the shots you see at the top of the crease--including that goal he scored.

Take the good with the bad: Chris Campoli
There's no doubt that Campoli's under the knife when it Alex Picard returns from his injury, but he had a pretty strong game once again tonight. He drove hard to the net early in the game, bowling over Boucher and getting the Senators' started on their crease-drive, and he assisted on Foligno's game-winning goal. Then again, he took a couple senseless hooking penalties and had his shot blocked to give Scott Hartnell an easy breakaway, so he's still got things to improve in his game.

Back on track: Anton Volchenkov's hit parade
The A-Train took a couple of games to get his timing back after returning from injury, but it was right on time tonight. He had a game-high four hits, including a big one on Mike Richards,