Another concussion-reducing product making the rounds

Share All sharing options for: Another concussion-reducing product making the rounds

I wrote last month about the Cascade helmet designed to reduce concussions, and today I'm writing about a product that has generated considerably less attention - likely due to the fact that it doesn't have Mark Messier peddling it. 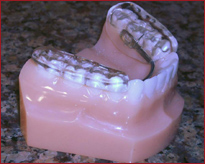 It's a set of specialty mouthguards, designed by a dentist who developed them based on his experiences working as team dentist of the New England Patriots. Coverage on it's use in the NFL has recently been featured on ESPN.com and the Sporting News' blog. While helmets (such as the Cascade mentioned above) can help to reduce brain trauma, they have a limited impact on blows to the jaw. That's where the Maher line of mouthguards comes into play. The custom fitting mouthguards (you can't just pick one up off the shelf - you need an approved dentist) are designed to reduce the force from these blows by spreading it to areas that aren't, y'know, your brain.

Mahercor Laboratories, the company that manufactures them, has started a push to get more hockey players using them, and players seem to be receptive. A rep from Mahercor informed me that many AHL players - notably those on the Hershey Bears - are sporting the appliance. There are also a number of NHL players with the Boston Bruins and Washington Capitals who are fit for Maher mouthpieces, though due to confidentiality reasons the only name I was confirmed was Chris Bourque. One of the mouthpieces that is proving the most popular with hockey players is called the Level III (pictured above) which fits tight like a retainer, therefore still allowing the players to beak at each other (or politely pontificate to the referee, if that's more their speed).

Another positive move is that one of the insurance providers for the NHL is paying to have players with prior concussion history fit for these pieces if they so desire. You have to think that some players will be understandably hesitant to put something in their mouth that might hamper their ability to talk, so a gentle push from in way of free coverage is a big plus.

Given the rash of injuries that have occurred in the NHL already this year, especially concussions, I expect you'll see a lot more players starting to wear mouthpieces like these, and other inventions designed to help avoid brain trauma. Given the high speed of collisions and the mass of the big bodies involved, no product is going to be able to eliminate concussions, but hopefully, a combination of products, rule changes, and smarter play on the ice will help to curtail the large concussion problem in the NHL today.

For more information on this product, check out the Mahercor Labs website. Thanks to Mark from Mahercor for providing us with all the details. Also, in case you were curious, I did not receive any money or free products for doing this write-up.