I recently had the good fortune of sitting down to interview Chris Hannah (vocals/guitar) and David "The Beaver" Guillas (guitar) of seminal Canadian punk band Propagandhi before they played a sold out show in Vancouver. We talked about childhood hockey memories, favourite players, their song "Dear Coach's Corner," and more. 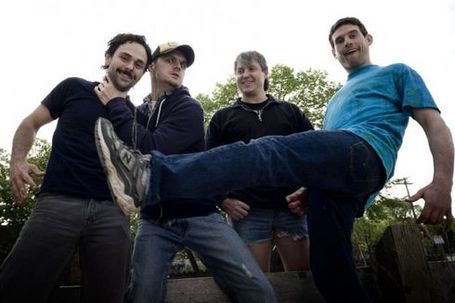 Do you have any good hockey memories from playing when growing up?

CHRIS: Oh, yeah. All of them. Every memory is a pretty good one. Driving down the back roads of Manitoba when it was so snowy that you'd have a convoy of cars going about this fast:
(Chris makes a slow gesture with his hand)
That haunting snow just snaking across. I love that. Oh, my first goal in Poplar Point, Manitoba? Love that.

CHRIS: No! Not roof daddy. I fanned on it and it went in.

CHRIS: That might be true! It wasn't him that I scored on, though.

BEAVER: He would've fought you after, though.

Now, as a Leafs fan growing up in Manitoba, I guess you weren't too devastated when Winnipeg lost the Jets?

CHRIS: I didn't care at all. I didn't watch hockey in the 90s, essentially. After Gretzky left Canada, my interest took a nose-dive for the majority of the 90s. It wasn't until around '99 where one day over at (drummer) Jord's house we started watching the playoffs. It was like "Oh! I forgot about this!" Got right back into it. It was the Leafs, obviously, with a pretty sweet line-up at the time.

What's worse: the over-the-glass delay of game penalty or the shootout?

CHRIS: I don't like either. I get the over the glass thing, but not as a gamebreaker. It's hard for the refs to know what's intentional or not... I don't like the shootout at all. That's not the way to do it. I like the old way.

BEAVER: A lot of people call it the most exciting thing aspect of hockey, watching that 1-on-0 shootout, but I just find that boring. I lose interest completely. Whoever wins that... it doesn't have any real meaning. It's just luck, y'know.

CHRIS: I'm surprised goaltenders haven't started a petition against it. That must suck being stuck out there for that.

Current or past favourite players?

CHRIS: My first favourite player was Bobby Orr, then Terry O' Reilly, because I was a Bruins fan in the 70s. My most hated players were Guy Lafleur and Steve Shutt, because my sister was a Canadiens fan. Then it was Wayne Gretzky, Messier, and Jari Kurri. Actually, I liked Daryl Sittler, too.

You must have also liked Steve Smith.

CHRIS: I got a kick out of what happened to him. And then Mats Sundin was my favourite player for a long time until he... left the (Leafs) Nation. One of my favourites now is Ian White, the most underrated player in the whole league.

Could you talk a little bit about your song "Dear Coach's Corner" from your latest album Supporting Caste?

CHRIS:  It is a song that is about the "Coach's Corner" segment between the first and second periods of Hockey Night in Canada. Specifically, it's addressed to Ron MacLean, the idea there being that he would be open to a possible analysis of collusion between professional corporate sports and the geopolitical interests of the prevailing order, whereas Don Cherry has about as much brain as this item here.

(Chris lifts up a piece of metal he finds nearby)

I don't even know what that is. I was going to dictate to the microphone to let me know later, but there's no point.

CHRIS: He's just a useless mouthpiece of a system that stinks. The kind of personalities - and hockey is rife with them - that just cozy up to power and forget about marginalized people. I think Ron MacLean represents some of the best things about hockey and Don Cherry represents some of the worst things. I despise the attempt of the NHL mirroring the NFL in the States to get a captive audience of part of the population to mindlessly nod their heads at military adventurism overseas. Especially to a whole nation of children watching on TV. I consider it a form of child abuse.

Have you heard a response from the CBC or anyone associated with it?

CHRIS: No, I don't think they would ever hear it.

You've mentioned a dislike for Don Cherry and an affinity for Ron MacLean, what other hockey analysts do you enjoy?

CHRIS: James Duthie makes me laugh. I know people hate him, but I like Pierre McGuire.

BEAVER: I was going to say that! I like him, too!

CHRIS: I get a kick out of him. Sometimes, Glenn Healy, I don't think I like him as a person, but sometimes I don't mind some of the things he says. Who else? Darren Dreger - I like Leafs Lunch. Jeff Marek! I don't know why they stick him on that weird desk. What's that called?

CHRIS: And get rid of JP Stock! What's his name?

CHRIS: PJ Stock! Get rid of him and put Jeff Marek there!

Our thanks goes out to Propagandhi and Smallman Records for their co-operation in setting up this interview. Propagandhi released Supporting Caste in March of this year. You can stream the disc, which contains the aformentioned "Dear Coach's Corner," at Punknews.org, another site that I write for. If you like it, pick up the CD or buy a digital copy to support this great band.