The Ottawa Senators benefited greatly from a depleted Pittsburgh Penguins defence corps, an off-game from goaltender Marc-Andre Fleury, and plenty of secondary scoring to soundly beat Pittsburgh by a 6-2 score. It's rare enough for any of Matt Carkner, Chris Phillips, Chris Kelly, and Jonathan Cheechoo to score a goal in any given game, let alone each of them scoring in the same game--and Phillips even added a second goal on the night. I'll turn the floor over to Silver Seven Radio (watch for its relaunch soon) co-host Mark Parisi for a Coles Notes recap of the game:

Ottawa played a complete game for once. Lots of people scored. Mike Fisher was great. Michalek is mad because Fisher has the same number of goals as he does. Spezza doesn’t understand what to do now that the spotlight isn’t on him. Regin is mad because now he will never get on the ice. Leclaire is mad because he really needed to keep it to one goal for his GAA. And Cheechoo gave us pizza.

Well said. But because I'm long-winded, I've got details to add. 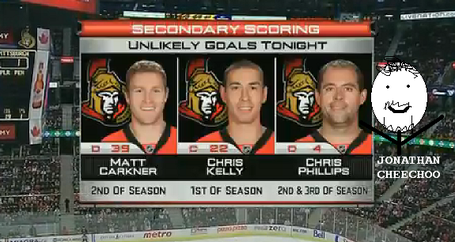 The game actually started pretty scarily, with Jordan Staal scoring only 69 seconds into the game to give the Penguins an early 1-0 lead. Ten minutes later, though, after some very strong sustained pressure in the Pittsburgh zone thanks to some effective cycling between notably Mike Fisher and Alex Kovalev, Carkner was able to fire the puck past Fleury to tie the game. Milan Michalek scored a powerplay marker in the second period, and then the Senators broke the game open with goals from Kelly--who had an impressive post-penalty breakaway goal, beating Fleury low blocker side--Phillips--whose two goals were from the very same spot, along the mid-boards on the left side, the first going far side and the next high short side--and Cheechoo to give the Senators all the offence they would need (and then some). Evgeni Malkin scored a late powerplay goal on a bogus powerplay to make it 6-2, but it didn't make any difference except for Pascal Leclaire's personal statistics.

To touch on that bogus powerplay quickly, it came right after Shean Donovan went down after a knee-on-knee collision with Matt Cooke. Donovan needed help to get off, which isn't a good sign when it's a player as tough as he is. Despite the fact that he's a fourth line role player who rarely even approaches 10 minutes of ice time per game, an extended absence could be tough for the Senators. Donovan's intensity does a lot to energize players on the rest of the team, and it's no coincidence that the team is 9-2-1 when he's in the lineup. Both Alex Picard, who was given two minutes for slashing, and Carkner challenged Cooke after the play, and Picard (or "pee car", if you're an FSN commentator) was the only one handed a penalty.

Back to the good stuff, though. It's amazing to see that Kovalev had no points tonight, because he had one of his most solid games of the season to date. His line, along with Fisher and Nick Foligno, was again the fulcrum of the Senators' offence: Fisher had three assists, Foligno had two, and the three of them controlled the play for most of their time on ice.

In doing so, they made it less obvious that Jason Spezza went pointless again tonight, and has no points in his last six games. He had a strong game defensively, but if you'd told me that the Senators were going to score six goals tonight and Spezza wouldn't have a point on any of them, I'd have had you committed. Even Filip Kuba got off the schnei tonight, netting an assist on Phillips' second goal (his third of the year and first in six games). Then again, Kuba had five shots on the night, Spezza only had one; hasn't that been an issue for a while now? I'm not panicking or anything, just excited for when Spezza gets that monkey off his back.

On defence, Picard had a pretty strong game tonight, his second in a row. In fact, if he didn't intersperse his good games with terrible ones, he'd look like a pretty good player in the Senators defence corps. He's well on his way to a career year, as his two assists tonight give him 9P (1G, 8A) on the season so far. (His previous career high is 22P in 2006-07 with Philadelphia.) If he could keep those defensive gaffes to the minimum, he'd easily surpass Brian Lee and Chris Campoli on the depth chart, and maybe even pass Carkner in tight situations.

Leclaire had a solid game tonight, although he wasn't overly tested. He had little chance on the first goal--Picard lost his check, a mistake that led to a 2-on-1--and the second goal was a sick shot by one of the best players in the league today.

Everything said and done, a very exciting game to watch, and a resounding statement that the Senators can compete against some of the most skilled players in the league.