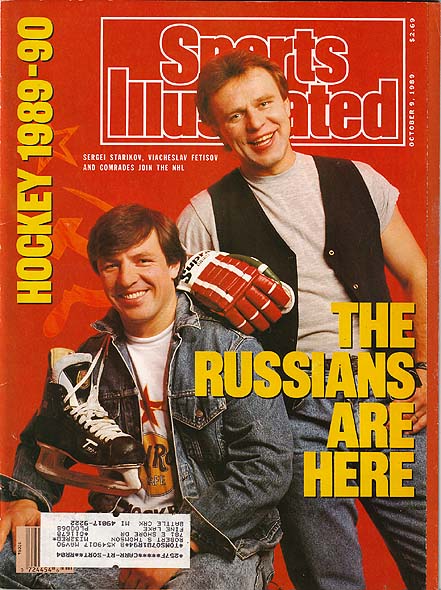 The glory days of hockey coverage in SI.

Living in Canada, where hockey reigns king, it's easy for me to forget that the sport isn't quite as publicized elsewhere. However, it still came as a shock to the system when I checked out the current issue of Sports Illustrated (dated Nov. 9th) and saw no hockey in it on my first read through.

On closer examination, hockey is in fact mentioned - twice. The first time is LA Kings defenseman Drew Doughty answering five questions as part of the Pop Culture Grid, and the other is a small, stamp sized photo of a goaltender as part of their "Check Out The Online Gallery" section.

That's it. Two very brief mentions in what may be America's most popular sports magazine (surprisingly, I could not confirm this). This was not a World Series commemorative issue, or anything like that. It was a standard issue, one that gave plenty of space to the other big three, as well as giving features to bobsled and motorsports.

Looking at SI's Covers Vault, hockey has been mentioned on one cover since the start of the season  - an NHL season preview mentioned in small font near the top of a baseball-dominated cover. That's it, despite the number of memorable stories and great games that have already happened in this season.

I know the NHL does not have total control over what a magazine writes, but they can have some influence, and to go almost completely ignored is simply unacceptable. If you want to build your brand into the US market and fix the damage done in the lockout, you have to start getting hockey into the public's eye. Part of that is being in popular publications like Sports Illustrated, because Drew Doughty mentioning that he'd like The Rock to play him in a movie may be pretty hilarious, but it's not going to draw in an audience to this game.