The re-education of Jason Spezza

Share All sharing options for: The re-education of Jason Spezza 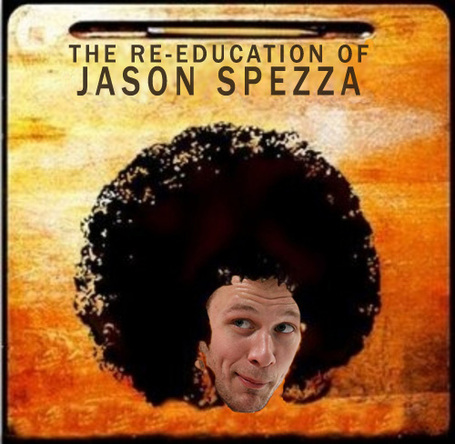 For all of his offensive flair, Jason Spezza's career has seen its share of criticism. Spezza has been criticized as being too soft, being a floater who lacks any defensive effort, and being prone to more turnovers than the local bakery. Spezza deserved a lot of this criticism -- not all of it, mind you, but a lot of it -- yet all signs point to Jason Spezza finally developing into the complete player the Senators hoped he would become when they made him the second overall pick in the 2001 NHL Entry Draft.

Looking at his stats, even in this small sample size, shows the two-way player that he is blossoming into. What's perhaps most surprising to a lot of people is that this progress in Spezza's defensive game started last season, not in the current campaign. Here's a quick look at his giveaways and takeaways over the past 5 years.

As you can see, Spezza's takeaways were, for three years, pretty stable, hovering around 44. However, last season he made a massive improvement in the takeaways department, helping him go from a career worst give/take +/- of -52 in 2007-08 to a far better -8 last season. Yes, he was still in the red, but that's a remarkable improvement, particularly on a Senators team that couldn't get anything right. And sure enough, this season Spezza is one of the team leaders in takeaways.

Oh, and did I mention he's actually putting his large frame to good use? The NHL is crediting him with 7 hits already, which I know is a flawed stat, but considering he only received 26 last year, it's safe to say he's throwing the body a bit more. Hey, why not some video evidence?

These fixes to Spezza's game are also helping him become become a more trusted player out on the ice. Last season, Jason averaged 22 seconds per game on the penalty kill. This season, he's up to 53 seconds on average -- more than double. What makes this even more impressive is that Ottawa has an abundance of strong forward penalty killers on the team, arguably more than last year.

Jason Spezza used to be the media's whipping boy. It used to be that if he did not contribute offensively, he was at best invisible and at worst a liability. These days, Spezza benefits his team in both ends of the rink, and only looks to continue to improve. After how much we've heard his name in the past decade, it's sometimes easy to forget that he's just 26.