In what might be the most ridiculous waste of time I commit this week, I've assembled a succession plan based on the Ottawa Senators' current defensive depth: 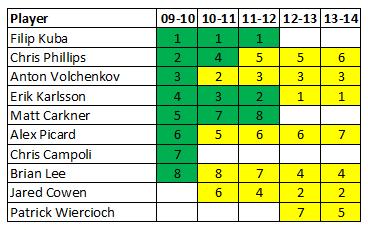 It was actually kind of cool to put together, even though it's the kind of depth chart which would change every week with a player's play and every season with the incoming and outgoing players. There are, obviously, flaws, a few of which I will openly admit:

It was still a fun excercise, though.
What are your thoughts about who will fit where, and when?