With Schubert's demotion, a legacy comes to a close

Share All sharing options for: With Schubert's demotion, a legacy comes to a close 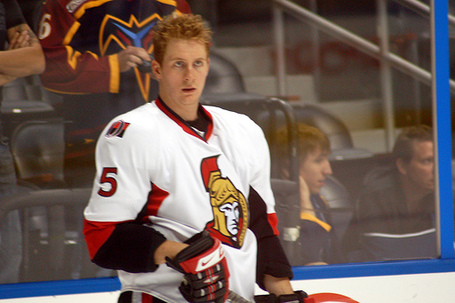 As you no doubt have heard, Ottawa Senators defenceman-cum-forward Christoph Schubert was assigned to the AHL's Binghamton Senators for the time being. Schubert has been used sparingly over the past two seasons, spending select time as an attacker and a defender when not scratched from the Senators' lineup. It was a gradual decline for Schubert, and his demotion to the AHL is something few would have envisioned in the summer of 2007, when he was signed to a three-year, $2.65M contract extension.

Along with Schubert's exit, though, so goes the final remnant of a notable chapter in Ottawa Senators history: The all-important fourth line of the franchise's 2007 Stanley Cup run.

Going into the 2006-07 season, Ottawa's fourth line didn't have Schubert on it. Over the course of the year, though, Schubert played more time as a forward, the hard-forechecking complement to Dean McAmmond's speed in the centre position. The line didn't receive it's final piece until the 2007 NHL Trade Deadline, when Oleg Saprykin was brought in to Ottawa from the Phoenix Coyotes.

Am I overstating the significance of the Senators' fourth line, circa the 2007 NHL playoffs? Maybe. But as a fan watching the games, they presented me with one of the most entertaining Senators storylines to follow. Not just because of my strange infatuation with McAmmond. They were just a fourth line of hard-working speedy sparkplugs. Although their shifts were few and far between, they usually resulted in a Senators-friendly change in momentum, and consistently outplayed the opposition's fourth line.

Saprykin's acquisition, famously lambasted by the Ottawa Sun front-page headline, "Freakin' Saprykin?", may have been among the factors that cost then-GM John Muckler his job; many were expecting a significant acquisition, and didn't accept that the asking price was too high as a defence. Still, Saprykin's speed, tenacity, and general gusto fit in well with the defensive responsibility of McAmmond and the hard-hitting, fast-skating (at least in straight lines) presence of Schubert.

Over the course of the playoffs, the fourth line didn't make headlines the way Jason Spezza, Daniel Alfredsson, and Dany Heatley--the three players who tied for the league lead in points in the 2007 playoffs--did. Still, those who followed the Senators realized that a capable second, third, and fourth line was important to then-head coach Bryan Murray's success, too.

The line combined for six goals, none bigger than the game-winning goal in Game Three of the Stanley Cup Final, plus five assists for 11 points total. There's no doubt that McAmmond was the linchpin on the fourth line, registering eight of those points and getting more ice time than the other two in all but four games he played in, but Schubert was important nonetheless. The three were split up for special teams time, with Schubert playing defence on the penalty kill when called upon.

Right after the playoff run, though, Saprykin wasn't re-signed, and he went to the Kontinental Hockey League. Then, at the trade deadline last season, McAmmond was traded to the New York Islanders in the deal that brought Chris Campoli to Ottawa. And now, Schubert's been relegated to AHL duty, at least until another team suggests they're interested in picking him up for half-price on re-entry waivers.

Schubert's played 268 games over five seasons for the Senators so far, scoring 23 goals and 42 assists for 65 points altogether. He's heading to Binghamton--a city he played three seasons with already--with a positive attitude, and a mission to show he's an NHL-calibre player, not an AHL star. Hopefully he does well there, and comes back here to improve the squad's chances this season.